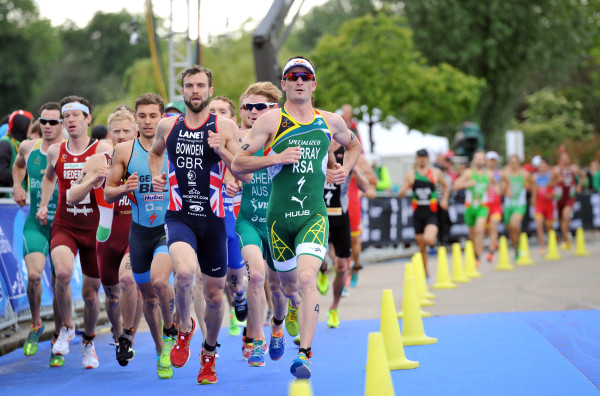 Richard Murray on his way to a fifth place at WTS London on Sunday. Photo Credit: Janos Schmidt, ITU

Richard Murray ran the 5km run leg at the WTS London on Sunday in a blistering 14 minutes and 12 seconds. The fastest run on the day by some 20 seconds.

Murray finished fifth in the race in an overall time of 51:01 for the sprint distance triathlon. Olympic champion Alistair Brownlee won the race in 50:39. The running route on Sunday was the same as during the Olympics in 2012. The highlight of the race for Murray was running that 5km 20 seconds faster than Brownlee. No one came close to Murray’s time. “My legs felt amazing on the run,” said Murray after the race.

The pace was extremely high right from the start in the race over 750m swimming, 20km biking and 5km running (half that of the Olympic distance). “Henri (Schoeman) pushed the pace big time on the swim. That helped him to finish 7th. And with Wian (Sullwald) 19th place it was a good day for South African triathlon with three South Africans in the Top 20. Makes me excited for Rio 2016!”

Murray was part of the second group coming out of the water and he had to cycle hard to close the gap. Starting the run he was in 12th place and some 50 seconds behind the Brownlee-group. “It was a solid day. The conditions were good and I am pretty happy with the result even if it is the dreaded fifth place!”

Murray is off to Germany to compete in the Bundesliga this weekend. “I am looking forward to race in Kraichgau on Saturday. It’s always is fun to race in these races and good for the season.”