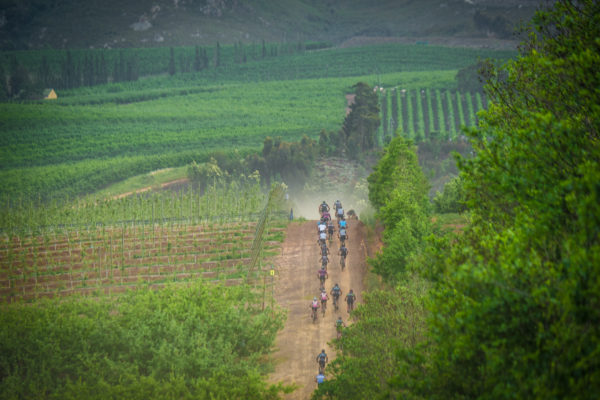 “Today was great. I really enjoyed the route,” says Monese. “We were under a little more pressure with the 2nd and 3rd teams chasing hard. It was harder to get away from them. We just kept pushing. Thanks to our current lead, we won’t be under too much pressure tomorrow. We’ll just relax and stick with the lead group.”

“It wasn’t as easy to get a gap today,” admits Lukoschek.   “We’re stronger physically though, so we just kept pushing. I expected the stage to be much more technical, but instead it was really smooth. On the “Sounds of Silence” section I could leave the breaks completely open. Stage Two was a lot of fun.”

The mixed team race was once again dominated by Team Oak Racing’s brother and sister duo of Stephan and Mariske Strauss. Team Oak Racing crossed the finish line at Oak Valley Wine Estate in 03 hours 08 minutes 12 seconds. “We went out really hard for the first 1 ½ hours, but then we started to struggle,” says Stephan. “We just wanted to get to the single track first. Stage Two was like a Cross Country race. Around every corner we dropped our gears and pushed.”

“Stage Two was sharp and punchy with a lot of ups and downs,” says Mariske. “The trails were amazing. Stage Three is going to be tough. We’ll just stick with the bunch and get to Hermanus.”

“Stage Two was amazing,” says Viljoen. “I couldn’t image it being better than last year, but it was. At approximately the 20km mark we felt strong and just got into the flow. The trails were lovely. I’m excited to take on Stage Three. Last year the Wildekrans trails were superb. I am really looking forward to riding them again tomorrow.”

“We just took it easy and settled into the stage,” says Kruger. “We’re having a lovely, relaxing weekend. Ilse and I have been friends for a long time. We studied together, but don’t get to see each other that often. W2W has given us the perfect opportunity to catch up.”

In 2017, Cape Epic was acquired by the IRONMAN group, part of Wanda Sports, to anchor a global portfolio of off-road events and to spearhead the development and expansion of a worldwide series of premium mountain-bike races.

For more information on the Absa Cape Epic®, visit www.cape-epic.com

For more information on the IRONMAN brand and global event series, visit www.ironman.com