12 Day countdown to a desert duel 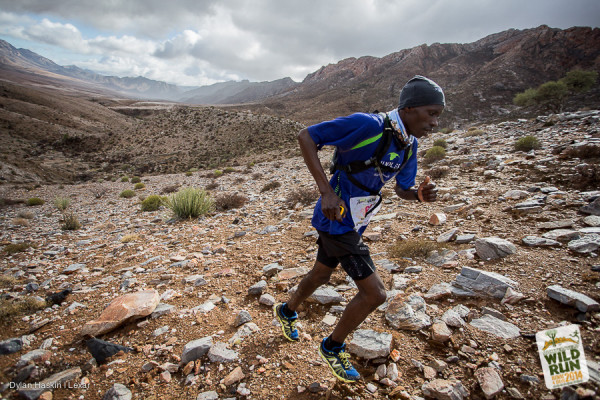 Bernard Rukadza at the Richtersveld Wildrun™ 2014. Image by Dylan Haskin.

With less than two weeks before the second Richtersveld Wildrun™ kicks off, anticipation is building for what promises to be a tight race through one of the most biologically diverse regions in the world. Though beautiful, this four day, 150km stage race is one of the most challenging trail runs in South Africa and runners can expect to take on a harsh, mountainous desert as they are tested to the limit.

At the front of the field, three of Southern Africa’s top trail runners and an American ultra-running legend will go toe-to-toe as they battle it out for top spot. Bernard Rukadza and Katya Soggot will both return to defend their titles and will come up against the likes of South African long distance trail running champion, Thabang Madiba and three-time Western States 100 mile champion, Nikki Kimball.

Both Rukadza and Madiba have been enjoying superb form in 2015 with Rukadza securing his second straight ProNutro AfricanX title in March and Madiba taking second place at the same race and at the Otter African Trail Run in October 2014. Madiba will be hoping to go one better at the Wildrun™ and take first place, but he will be up against it thanks to Rukadza’s form and route experience from the 2014 event. This is also the first time Madiba is taking on a run of this magnitude and he will have to adapt quickly to stay in the hunt. “Stage racing is one of the races that helps to find your strength in running. You learn to push while in pain and learn techniques to apply to survive all stages. A win will be a big bonus for me but I’m looking forward to give all my best,” said Madiba.

“What more can be said other than this is going to be one hell of a race! Bernard has been on fire in the Cape recently, winning everything from marathons to short Spur Trail Series™ events, but Madiba comes with the South African long distance trail champion label and arguably more endurance experience. I can’t wait to see these two trail heavy weights going head to head, solo, and in the magical Richtersveld desert,” said Owen Middleton, MD of Wildrunner – the events company behind the Wildrun™. 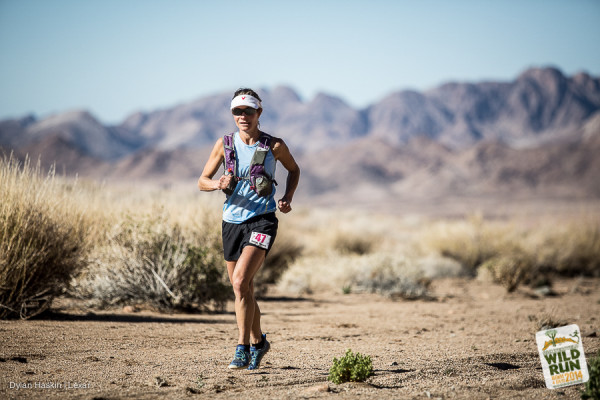 Katya Soggot at the Richtersveld Wildrun™ 2014. Image by Dylan Haskin.

In the ladies field, Katya Soggot will be representing South Africa off the back of a string of victories in the Western Cape, including the Spur Silvermine Mountain XL, Spur Cape Summer Trail Series™, Three Peaks Challenge, Matroosberg Challenge and Jonkershoek and Helderberg Mountain Challenges. She has been virtually unbeatable locally and will relish the opportunity to measure herself against an ultra-runner of Kimball’s calibre. With three Western States 100 titles as well as an Ultra Trail du Mont Blanc and Marathon des Sables title, Kimball is one of the top ultra runners of her time and will be hard to beat, but Soggot’s experience from the 2014 event is sure to come in handy.

However, this event is not all about the racing and as Soggot was quick to point out, she is extremely excited about the whole experience thanks to her memories of 2014. “The magnitude of untouched wilderness, the comfort and welcome at every rest camp, and the elves who made it so. My feet touched where angels fear to tread. I never dreamt I would have the privilege to relive such an experience and I am overwhelmed with gratitude to Boundless Southern Africa and Wildrunner for the opportunity,” she said.

Since its inception in 2014, the Richtersveld Wildrun™ has had amazing support from Boundless Southern Africa and marketing manager, Roland Vorwerk was equally excited about the quality of racing anticipated. “The Richtersveld Wildrun™ route includes many of the Park’s most spectacular features, and includes trails that very few people get to traverse. We are looking forward to these runners experiencing the unique natural and cultural landscape of the /Ai/Ais-Richtersveld Transfrontier Park and meeting the communities associated with this innovative event.”

About the Richtersveld Wildrun™
The 150km Richtersveld Wildrun™ takes place in the /Ai/Ais-Richtersveld Transfrontier Park over four days, from 02 to 05 June. Starting and finishing at Sendelingsdrif, runners will get to experience a world of geological splendour. From the heights of Helskloof pass, to the granite slabs of Tatasberg, the green swathe of the Orange River, the gargoyles of Halfmens Ridge and the crystal fields of the Sendelingsdrif plateau – every kilometre is unforgettable and participants are sure to leave the Richtersveld changed people.  Botanically, this area holds 40% of the world’s succulent species, many with incredible adaptations to the harsh mountain desert environment. The Richtersveld experience is unlike any other in the world.

For more information on the Richtersveld Wildrun™ visit the website at www.wildrun.com.