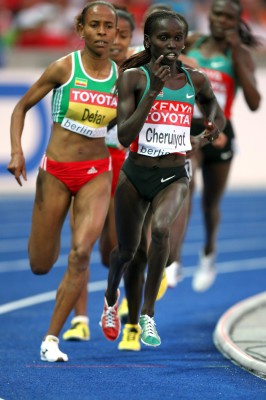 Olympic medallist Vivian Cheruiyot will line up with some of the world’s and South Africa’s best athletes to take part in the inaugural FNB Cape Town 12 ONERUN on 17 May in Cape Town.

Michael Meyer of Stillwater Sports today announced that Cheruiyot is the first in a line-up of top class international and national athletes to confirm her entry in the 12km event that offers a total prize purse of R300 000, this includes a first prize of R40 000 to the first male and female athletes across the finish line.

In 2012 she was selected as the Laureus World Female Athlete of the Year for her incredible contribution to the sport of running and her achievements at the London Olympics.

In 2009 she hit a purple patch that would take her to the World Championship 5000m title, victories in the World’s Best 10km Race in Puerto Rico, the Great Manchester Run and a year-end win in the New Year’s Eve San Silvestre Vallecana 10km in Madrid.  In addition to this, there was Silver and Bronze in the 3000m and 5000m at the World Athletics Final in Thessaloniki, Greece.

Top South African athlete Rene Kalmer, who has amassed 40 national titles in 16 years of racing, has faced Cheruiyot once before in the 2010 World Indoor Championships in Doha.  Once again it was Meseret Defar who took the gold in the 3000m, Cheruiyot had to settle for silver and Kalmer finished eighth.

Kalmer is excited at the prospect of racing the Kenyan on home soil and her reaction on hearing the news that Cheruiyot would be racing in Cape Town was one of excitement.  “This is really good news and I feel honoured to be in the same line up as her in my home country,” said Kalmer just before departing for the Vienna Marathon.  “This is incredible for South African athletics and the sport of road running in general.”

Meyer is also excited at the prospect of having these top international athletes race in Cape Town.  “This is a coup for us and for road running as having someone of Vivian’s calibre racing in the inaugural event is phenomenal.  She will spearhead the most formidable field ever assembled in South African athletics and we look forward to announcing further names over the next two weeks”.