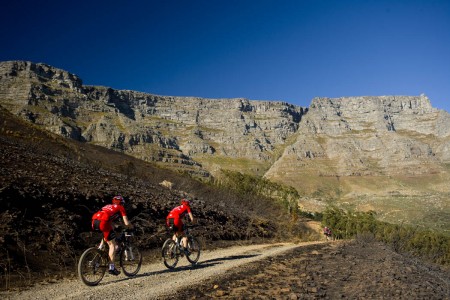 The Absa Cape Epic will return to the slopes of Table Mountain in 2015 when the rugged eight-day race’s Prologue is staged from the University of Cape Town. – Photo www.cape-epic.com

The Absa Cape Epic will return to the slopes of Table Mountain in 2015 when the rugged eight-day race’s Prologue is staged from the University of Cape Town.

The much-anticipated route announcement took place in Cape Town on Wednesday (October 22) and the Mother City will kick off the 2015 edition on Sunday, March 15. From there the course takes riders to the Elgin Valley, Worcester and Wellington before the new Grand Finale finish venue at Meerendal Wine Estate on March 22.

Defending champion Kristian Hynek of the Czech Republic said there appeared to be “a lot of climbing – and some long climbs, which I enjoy”.  Hynek will be back to defend the title he won this year with German Robert Mennen.  In 2015, however, he will be racing with Austrian Alban Lakata.

“There is also more singletrack, which makes it fun,” he added.

The Prologue will be staged on Table Mountain for the first time since 2009.  It will start and finish at UCT and, although only 20km, it contains some of the toughest climbs on Table Mountain – including one that has been given an unprintable, expletive-laden name by locals and another called Deadman’s Tree.

There will be several other talking points about the route once riders have crossed the finish line at Meerendal after eight days.  One of those will be the Paardeberg climb on the Stage 7 – riders will gain an eye-watering 600m of elevation in a six kilometre climb.

Stage 1 features one of the Epic’s legendary climbs, Groenlandberg, and – at 113km and with 2 800m of vertical gain – threatens to be one of the toughest days of the event this year.  The stage begins and ends at Oak Valley Wine Estate in the Elgin Valley, as does Stage 2, a 92km loop, which will take participants along many kilometres of the area’s excellent trail network.

Stage 3 is the longest stage at 128km and takes riders from Oak Valley to their new race village in Worcester.  They spend another day in Worcester for the 111km Stage 4, which starts and ends in the town and will pit competitors against some of the toughest terrain in the Western Cape.

Stage 5 is a transition stage to the last race village of the 2015 Absa Cape Epic in Wellington.  It is 117km long and includes 2 500m of vertical gain, including a climb up the Bain’s Kloof Pass and some fierce ascents in the Welvanpas trail network: it will prove to be another testing stage in the 2015 event.  Riders will get a chance to enjoy themselves on Stage 6, a 71km loop through some of the best trails in the local valleys.

And then it is the final 87km home to the Grand Finale finish at Meerendal.  But before they get there the remaining competitors will have to negotiate a climb that is destined to enter Epic folklore – the Paardeberg, slap bang in the middle of the last stage.  Kleinhans said it was “really special to be finishing at Meerendal … that’s very different but a nice difference”.