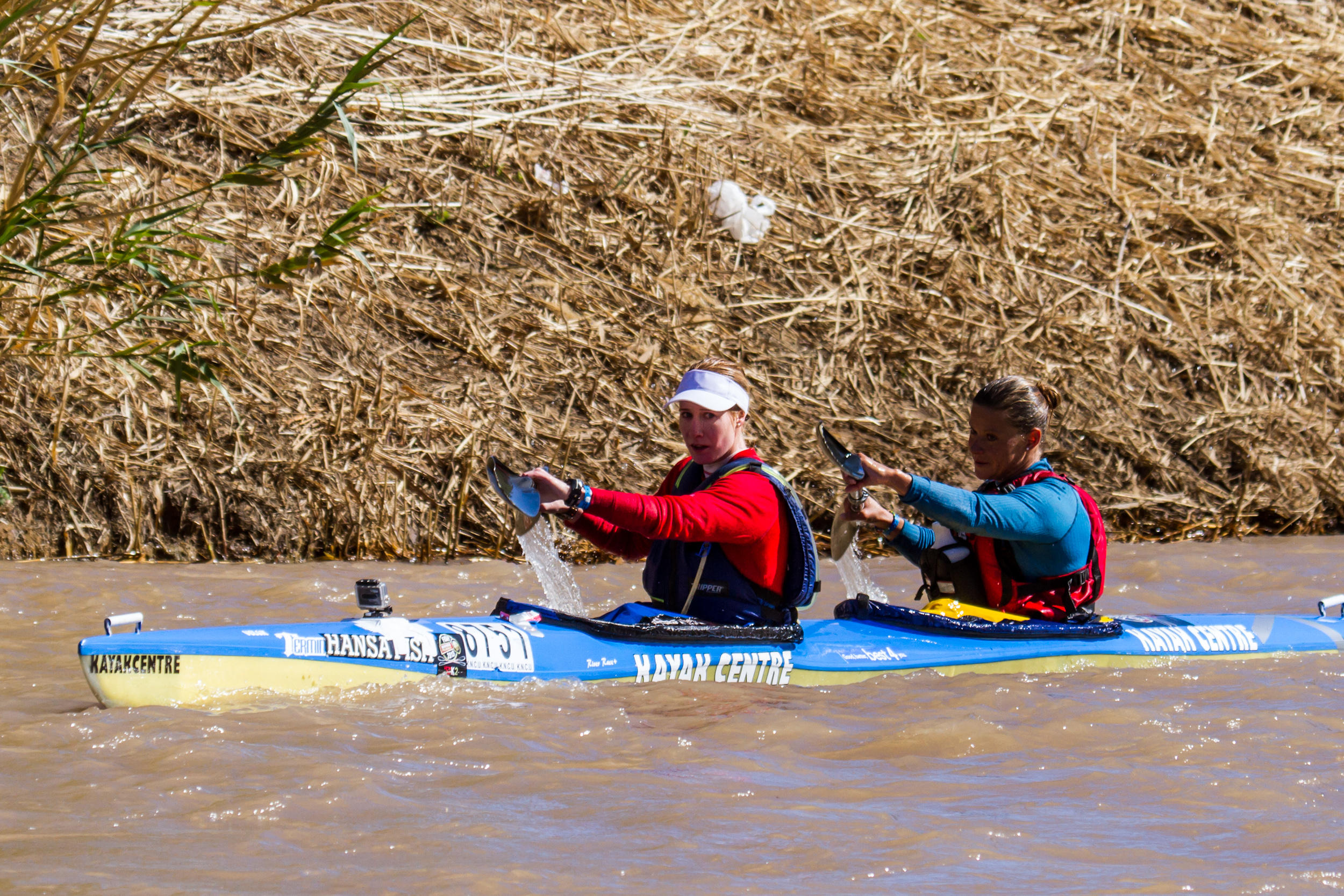 Abby Solms and Anna Kožíšková will be the boat to beat in one of the most hotly contested women’s races the Hansa Fish River Canoe Marathon has enjoyed in years. John Hishin/ Gameplan Media

Cradock – The 2015 Hansa Fish River Canoe Marathon is fast shaping to be one of the hottest women’s clashes in recent history of the Eastern Cape’s major with the country’s top K2 women’s crews all vying for a coveted podium place.

Defending champions Abby Solms (Kayak Centre) and Anna Kožíšková – formerly known as Anna Adamová – will be a tough crew to beat, especially with their confidence sky-high after Kožíšková’s recent K1 Marathon World Champs victory in Győr, Hungary and the pair’s win at the weekend’s Pre-Fish.

The pair are however likely to be constantly checking over the shoulder throughout the two day, 82km journey from Grassridge Dam to Cradock Sports Complex as a talented pack of female K2 crews looks to chase them down.

Likely to be amidst those leading the charge are Solms’ twin sister Alex Adie and Nikki Mocké – a pair who have won the two most recent editions of the Breede River Canoe Marathon in the Western Cape while London Olympic bronze medallist Bridgitte Hartley and surfski sensation Michelle Burn have a secret desire for a podium finish.

Donna Tutton and Nicole Russell’s combination is untested but experienced and determined one, while fellow Durbanites and MacSquad Elite members Jenna Ward and Kyeta Purchase put in a performance well beyond their years in the hotly contested K2 Senior Women’s clash at the recent Marathon World Champs which saw them finish an impressive fifth.

The young stars also performed admirably at the 2015 ICF Ocean Racing World Championships in Taihiti last week and Ward and Purchase will be hoping to complete the frantic period of their calendar with a strong finish in Cradock.

While their ages – Ward being 22 years-old and Purchase just 16 – may leave some hesitant, especially amongst 2015’s such talented women’s field, Ward is familiar with what it takes to earn a Hansa Fish podium positions having done it in both a K1 and K2 previously.

International surfski sensation Chloe Bunnett will be another keenly watched character of this year’s Hansa Fish as she returns to South African soil to team up with Kirstin Scott for this weekend’s showdown.

Cape Town’s Bianca Beavitt (Century City/Pink Lady) charged to her maiden Berg River Canoe Marathon crown in July and will hope to carry some of that good form in this year’s Hansa Fish clash when she and Robyn Henderson combine.

Peek sisters Jordan and Cana combined effectively in 2013 to finish sixth however 2015 will see the two tackle the Eastern Cape challenge with different partners.

Older sister Jordan will look to add a maiden K2 Hansa Fish top five to her K1 fourth placed effort of 2014 when she and Natasha Bulbring combine while young Cana – who claimed a remarkable second in this year’s Dusi Canoe Marathon despite still being a junior – will compete with K2 Marathon World Champs partner Donna Hutton.

The sisterly trend continues with Bianca and Tamika Haw as the pair return to the water after enjoying much time in the saddle of their mountain bikes during the winter while Anna Notten and Philippa Phelp are also likely to be hoping to be in the top 10 mix.

The combinations of Nombuso Mzolo and Sneziwe Gxobole as well as Asanda Ndlovu and Nokukhanya Shange are also likely to draw great interest throughout the two day affair.

It all adds up to a fascinating tussle that will decide not only a coveted place on the podium but, against a field this strong, a top ten finish will be as highly prized.