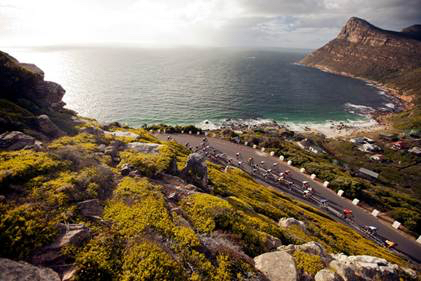 Traditionally the race is held on the second Sunday in March, but in its 39th year, the world’s largest timed cycling event will move to the first Sunday in March.  This follows a request by the City of Cape Town that will see a number of events accommodated in the Mother City during the early part of March 2016.

David Bellairs, a director of the CTCTT, explains further: “The Cape Town Stadium has already been booked for a major international show on the same weekend as the Cycle Tour, and after discussions with the City and Province, we agreed to bring the date of the 2016 event forward by a week. As the Good Hope Centre is also potentially not available to host our annual Lifecycle Expo next year, we are considering other venue options for this event.”

The 2015 Cape Town Cycle Tour, dubbed the Show you Care Solidarity Ride, drew nearly 34000 cyclists who pedalled a substantially reduced 47km route in support of the fire fighters who battled the blaze and residents affected in the week leading up to the 2015 event.  The 2016 Cape Town Cycle Tour will return to its much-loved format with thousands of local and international cyclists anticipated to line up on Hertzog Boulevard to tackle the 109km route around the beautiful peninsula.

This year’s entry process is scheduled to open in early-September, and if 2015 is anything to go by, they are likely to sell out quickly.  Bellairs adds, “Entries to the 2015 Tour sold out in a record eight hours and we anticipate high interest in the 2016 event.”

Keep informed of developments of the 2016 Cape Town Cycle Tour by liking us on Facebook www.facebook.com/cycletour or following us on Twitter @CycleTour_SA for regular updates.

For more information on the Cycle Tour, visit www.cycletour.co.za.