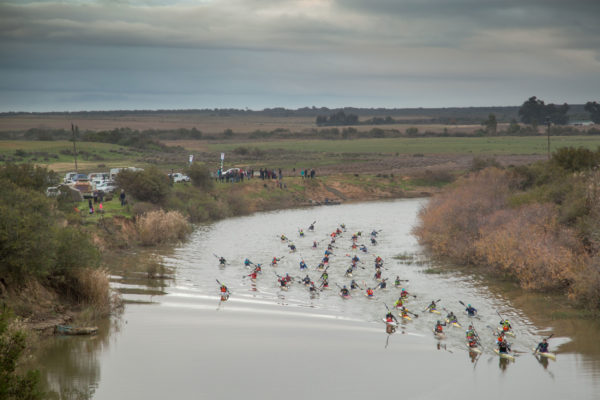 Sweeping changes have been approved for the Berg River Canoe Marathon, including its conversion to a team event, and the scrapping of the pre-race time trial. John Hishin/
Gameplan Media

Sweeping changes have been approved for the 2018 edition of the Berg River Canoe Marathon, which will be held from Wednesday 11 July to Saturday 14 July 2018.

The organisers of the race are banking on the arrival of the winter rainfall to fill the Berg River in time for the annual odyssey from Paarl to Velddrif on the West Coast, and have committed to going ahead with the event despite the ongoing drought.

The biggest change in the race structure has been the introduction of a new team format for the competitive side of the race, involving paddlers pairing up for the four day race.

The event will still allow paddlers keen to take on the 240km challenge in a single to enter as solo paddlers.

The pre-race time trial has been withdrawn and paddlers will instead be seeded for the start of the first stage using the Canoeing South Africa national seeding ladder.

The race, widely recognised as one of the toughest ultra-distance marathon canoeing events in the world, is raced over four stages taking the athletes and their support crews through the Winelands, the Swartland and then down to the Cape West Coast.

Entries for the 2018 Berg River Canoe Marathon will open on 2 April 2018 via the race website.

The Berg River Canoe marathon starts in Paarl on 11 July and ends at Velddrif on 14 July. More information can be found at www.berg.org.za