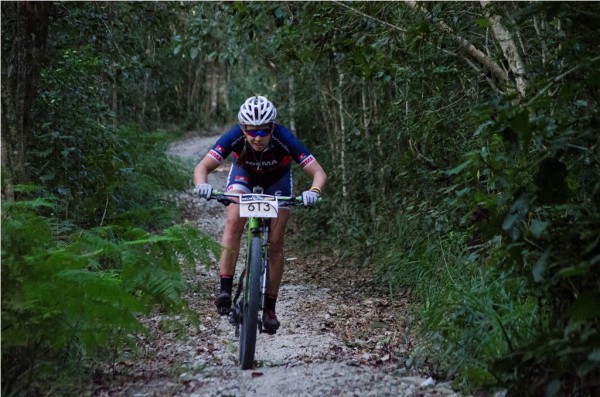 4. Candice Neethling made it two from two with a superb ride on Stage 2 of the 2016 RECM Knysna 200. Photo by: Julie Anne Hoffman.

On the second stage of the 2016 RECM Knysna 200 mountain bike race Dylan Rebello and Candice Neethling repeated their stage winning heroics of Friday to extend their race leads. The young duo, riding for the Momsen Factory Team and Team Dorma respectively, were superb throughout the 70km stage which took place from Quinta da Montanha on Saturday.

In the Solo Men’s race Rebello led from the off, dropping first Shan Wilson and then Nico Pfitzenmaier on his way to claiming the Ultimate Cycling King of the Mountain prize just three kilometres into the stage. With the climbing only relenting slightly after the R1 500 spot prize Rebello didn’t ease off the pace and soon built up a healthy lead. By the first water point near the 25km mark the riders had already clocked up 1 000 meters of altitude gained and the climbing suited Rebello, as he extended his lead on Pfitzenmaier throughout the climb. On the singletrack that followed Rebello used his local knowledge of the trails to maintain his lead without taking undue risks. Behind him Pfitzenmaier was chasing hard and experienced his first of many punctures on the day. The Team Dorma rider split a sidewall and had to put a tube in his tyre costing him second place on the trail.

There-after the day was a long and frustrating one for Pfitzenmaier as he battled puncture after puncture. The only silver-lining for him was the camaraderie he experienced on route. Pfitzenmaier was given many a CO2 bomb and even a tube by fellow riders. His most notable assistance came from Derek Devine who saw Pfitzenmaier stopped near the end of the Enduro section, completed it and then pedalled back uphill to provide him with a spare tube.

While Pfitzenmaier was losing time with punctures Wilson and David Cooke were Rebello’s nearest rivals on the trail. Though they couldn’t reel in the leader their battle for second was a fierce one. Cooke caught Wilson in the final kilometres on the lagoonside road. Wilson had to dig deep to hang onto his wheel, but rounding the final bend on Thesen Island Wilson couldn’t summon any further reserves of energy and Cooke outsprinted him for second position. The result, coupled with Pfitzenmaier’s misfortune sees Wilson move to second in the Solo Men’s general classification while Cooke moves up to third.

In the Solo Women’s race Neethling saw off a sluggish start to put in a dominant ride and in so doing claimed her second stage victory of the race. Caught slightly off guard leading up to the Ultimate Cycling Queen of the Mountain hot spot she couldn’t match Yolande de Villiers’ pace up the climb and surrendered the spot prize to the mixed category contender. But once de Villiers stopped to wait for her husband, and riding partner, Henties to catch up Neethling lead the women’s field and didn’t look back. Neethling rode most of the stage with the leading men’s team, the Coimbra Cycle House duo of Vickus Boshoff and Iniel Hattingh, and crossed the line in sixth overall. Behind her, Carmen Buchacher put in another stellar ride crossing the line in seventh overall, seven minutes down on the women’s stage winner. The fight for the final Solo Women’s podium spot was a close one, with Nina Hind just managing to hold off Katja Steenkamp.

The most exciting finish of the day though was contested by two teams who weren’t technically racing each other. The leading Open Men’s team of Ian Jantjies and Brandon Williams, representing the Knysna Sport School, pipped the second placed Masters team of Allen Cox and Ralf Fletcher, riding in the TOPCO colours, to the line by a mere one hundredth of a second.

The third and final stage of the 2016 RECM Knysna 200 takes place on Sunday and includes the famous Harkerville Red Route in its 56km journey from the Harkerville Forest Station back to Knysna. You can follow the action on Twitter (@recmknysna200), Periscope and via live tracking on the MySOS application’s website (www.mysos.co.za), from 08:30.