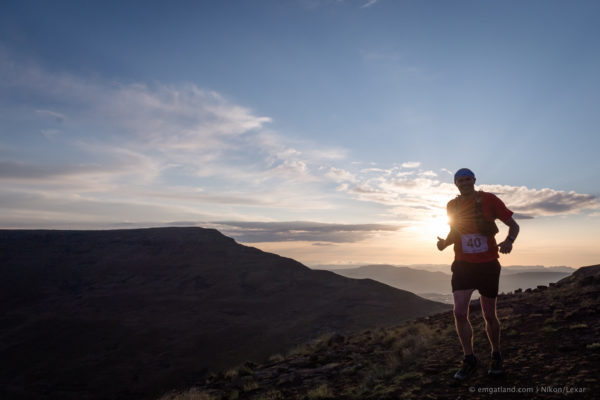 The countdown to the Old Mutual Wild Series Golden Gate Challenge is under way and participants are looking forward to one of the jewels of the national trail running circuit.

Now in its sixth consecutive year, the three-day event is proving to be a favourite on the running calendar thanks to its exceptional route traversing the Golden Gate National Park. Besides offering an amazing experience to its athletes, the event raises funds on behalf of SANParks and the conservation of the critically endangered Bearded Vulture.

On October 21, participants will embark on the trail run covering 70km over three days, through the magnificent Golden Gate Highlands National Park and passing through unexplored and restricted territories such as Little Serengeti and Cathedral Caves. While stages of 27km, 29km and 17km may not seem like too much of a challenge for some, runners are reminded that the mountains are steep, the altitudes high and the terrain wild and relatively untouched.

Each participant taking part in this year’s Old Mutual Wild Series Golden Gate Challenge has contributed via their entry fees towards efforts to help protect the estimated 100 remaining pairs of Bearded Vultures in South Africa.

“The bearded vulture conservation is of international significance in that these special birds are critically endangered. Since inception of the Golden Gate Challenge we have been able to procure, among other things, just over R100 000 spent on the vulture hide itself, an R80 000 trailer with meat saw, monitoring cameras of R20 000 at the hide, an information centre that cost R100 000 as well as walking trail maintenance and a new trail costing R200 000. We are hoping to get another R100 000 this year,” says Victor Mokoena, acting Park Manager of Golden Gate.

Runners of the Old Mutual Wild Series Golden Gate Challenge are accommodated in their own tents in the race village at Glen Reenen Rest Camp, with all the amenities and of course a festive atmosphere.

This year, a daily Sundowners Session will be introduced where runners will be able to take part in assisted yoga/stretch sessions and get to hear talks by some inspiring runners. Fran Siebrits, founder of Tuning In (www.tuningin.co.za), will be hosting the yoga/stretch sessions. Says Fran: “A healthy muscle is both a strong and a supple one. If one only works a muscle to strengthen it, without stretching, then the muscle only gets tight. It’s important to include both active and passive stretching in an exercise routine. I’ll also be teaching the runners to breathe effectively – it’s a simple yet profound detail. The body, mind and breath are an incredible superhero team.”

Bongmusa Mthembu, 2014 Comrades winner, will be taking part and will be one of the guest speakers at the Sundowner Session.”I’m really looking forward to participating in this challenge – it is something different from the ultra road racing I’m used to and I’ve also never participated in a three-day race,” he says. “It will be great to meet new people and explore new environments, plus it’ll be a good training run for me as I’m going to Spain later this year to represent SA in the World Champs.”