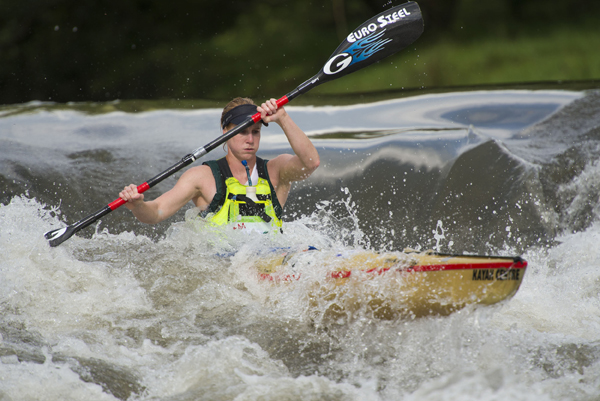 Underberg – Pietermaritzburg ace paddler Abby Solms will become the most successful paddler of all time at the competitive and popular N3TC Drak Challenge Canoe Marathon on 21 and 22 January if she completes her seventh win in the women’s race in 2017.

The 27 year old Team Euro Steel star has five back-to-back wins in the 72 kilometre Southern Drakensberg classic, which she clearly prioritises as one of her favourite races on the national calendar. She shares the race record of six wins with Ant Stott.

She also prizes the technical demands that the race throws at its participants as it tests the river skillset ahead of the FNB Dusi Canoe Marathon which is less than a month later.

“I probably end up racing the Drak a bit too hard. I just get caught up in it and I love it so much!” said Solms.

“The women’s field at the Dusi is usually quite small so if you have overcooked it on the Drak us girls are lucky that it might not affects us that much on the Dusi. That’s my thinking anyway!”

She also said that, while the shorter, more technical Drak Challenge was a prized title in its own right, she also sees it as an important benchmark in her preparations for the FNB Dusi.

“There isn’t a lot of time before Dusi but it is important get the distance in, in a racing environment, and to come away with some confidence in your river paddling ability,” she added.

Solms said she was planning to spend time on the uMzimkhulu River section that hosts the N3TC Drak Challenge during the end-of-year holidays.

“If there is water in the river, then I will definitely go and paddle there!” she enthused.

“In a K1 year it is important to be comfortable in your boat, and I haven’t done too much in my K1 and I want to get my skills up,” she said.

Solms’ six-win run was interrupted in 2012 when Robyn (Kime) Owen won the women’s title in a race that saw Solms on the back foot right from the get-go after a momentary lapse in concentration saw her take a swim at the start, after which she never saw Owen again.

Her river skills have improved significantly in recent years, and this season she is hoping to finally add the one big title that has somehow eluded her – the FNB Dusi Canoe Marathon K1 women’s crown.

The 2017 N3TC Drak Challenge Canoe Marathon takes place in the Southern Drakensberg on 21 and 22 January 2017. More information can be found at www.drak.co.za