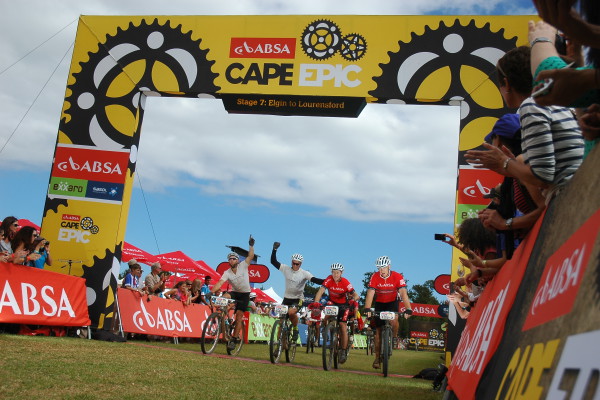 Previously, when sportsmen retired they turned their hands to coaching. Some even dabbled in selling fax machines and other now-defunct office equipment. Failing those rather dour retirement pastimes, there was always a golf day around the corner that required a bleary-eyed ex-Bok to announce at the first tee, or maybe even participate in a sponsored event while dreaming of glories past.

Thankfully, along came Supersport, and now most local recent retirees from the sporting world get snapped up to offer analysis, even commentary.

But not everyone is cut out for television. Enter, the Absa Cape Epic, a demanding assault on the body and mind that’s provided an outlet for the competitive frustrations of former nine-to-five rugby ball bludgeoners.

“The Epic is about courage and commitment,” says 1995 World Cup-winning flyhalf Joel Stransky, “I think that’s why so many rugby players turn their attentions to it when they no longer have rugby in their lives. You need to be brave out there, but it also takes a lot of hard work just to get to the start line. Rugby players like that.”

Robbi Kempson was the first former Springbok to participate in and finish the Absa Cape Epic. Once was enough for him, but he understands the appeal the race holds for retired professional sportsmen. “Rugby players, like any professional athletes, are highly competitive,” says the 2008 Cape Epic finisher. “Generally, we like things that involve grit and determination. I think that most of us have a knack for finishing things we start, so that’s probably why the Cape Epic is attractive to so many former professional rugby players.”

John Smit, who completed his first Cape Epic in 2014 and who will be lining up at the Prologue again this year, says it was his wife who pointed out that he was getting miserable when there were no rugby balls to chase.

“When I stopped playing I didn’t train, go to gym, or do anything for about six weeks. I got more and more miserable until eventually my wife was telling me to go and find something to do.

I realised then that being competitive is in our blood. Rugby players are always competitive, whether it’s on the field, in training or at the gym. Mountain biking is the closest you can get to that. You have to vasbyt, and there is a competitive edge, even at the back of the field and in training. So many elements of the Cape Epic are similar to rugby.”

Smit uses the preparation for the Rugby World Cup as an example of the similarities between rugby and mountain biking. “The months before the event are crucial. The Cape Epic is the same. It’s the seven or eight months of hard work just to get to the Prologue. That’s something that rugby players can deal with. Taking part in the Cape Epic gives me a sporting purpose again; it’s something to feed the competitive monster.”

Marius Hurter, a four-time finisher of the Cape Epic, enjoys the places that he will go at the Absa Cape Epic – on the bike and in the mind.

“You push your body to the limit, and then it recovers,” says Hurter. “That’s the amazing thing. You go until you can’t go any longer, but you have to push. At times you are deep in your thoughts, and you learn a lot about yourself.

Theirs is lots of pain and suffering, but you push your mind past the pain. You push through day after day. I enjoy that.”