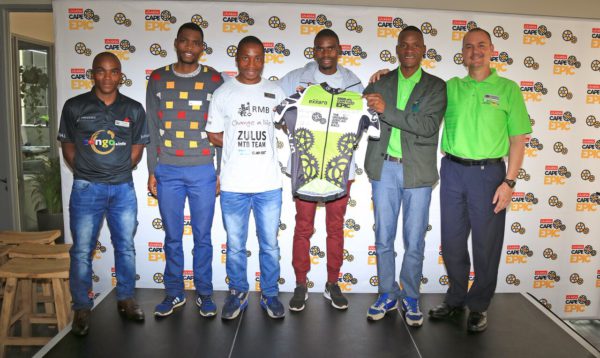 In addition to the teams fielded by the Exxaro MTB Academy, in 2017 the Exxaro special jersey race for development riders will also include teams committed from academies in Gauteng, KwaZulu Natal and the Western Cape. The category is open to historically disadvantaged South Africans under the age of 26.

“The Absa Cape Epic is proud of its record of encouraging development riders and with this initiative we want to celebrate our next generation of star riders,” said Absa Cape Epic CEO Lynn Naudé. “Five riders who have participated in this category have already gone on to represent South Africa and we have the opportunity to contribute to developing up-and-coming South African talent in the build up towards the 2022 Commonwealth Games in Durban,”

Naudé announced on Wednesday that the race had formalised an arrangement with the Diepsloot MTB Academy in Gauteng, the Change A Life Academy in KwaZulu Natal and Songo.Info programme from Stellenbosch in the Western Cape and each would receive two free team entries to the 2017, 2018 and 2019 races.

“The eight-day Cape Epic takes its toll on participants and there are a limited number of people in this age profile who have the ability to finish the Cape Epic, so the three organisations have recommended that we start by extending two entries to each of them,” Naudé said. “This will increase the number of teams in this category by 54% over the 2016 figure, but for us it’s more about approaching this in a sustainable way for young riders who are in the early stages of their riding careers.”

Another 10 entries have been made available to sponsors, charities or others who might want to enter a team in this category.

Mellis Walker, a member of the Exxaro MTB Academy steering committee who also sits on its Board, welcomed the initiative and said it would broaden and strengthen the competition for the Exxaro jersey.

“Mountain biking is growing in the communities where these programmes operate and a competitive development category at the Absa Cape Epic will accelerate the progress of young talent.   We are proud that five riders who have participated in this Exxaro special jersey race have already gone on to represent South Africa.” said Walker. “We want to build heroes in these communities and foster a love for the sport among them. Doing so would also expose a new audience to the Absa Cape Epic and mountain biking generally,” he added.

Naudé paid tribute to the role of Exxaro, which launched its MTB Academy in 2011 and has sponsored the green special jersey for this category since 2012: “Exxaro has been central to the introduction of the category and getting us to this point and we are extremely grateful for all the support over the years. Its generous contribution has put us in a position where we are ready to take this step forward.”

Naudé also announced that the Absa Cape Epic would support four charities for the next three years: the Anna Foundation, Qhubeka, Laureus and the Cape Leopard Trust.

“We have refined our approach and from 2017 and we will work with charity partners that are closely aligned with our core business,” she explained. “There are three areas of focus: first are programmes that use sport or bicycling to uplift communities; second are those linked to Absa Cape Epic host towns; and third is environmental conservation, since our sport requires ongoing interaction with the environment.”

Entries will be reserved for the charities and they can sell or raffle them. Due to the very limited number of entries to the race, these entries are highly sought after.  Charities will also be given a platform at the event itself and on the Absa Cape Epic media channels.

“We’ve worked with these charities before, so we are familiar with their outstanding work and the ethos of each organisation,” said Naudé. “With a streamlined charity programme and commitment for the next three years we’ll be able to dedicate more attention to each organisation and endeavour to make a meaningful difference to the communities that are touched by the race.”

She concluded by saying that teams riding for charities of their own choice was synonymous with the Cape Epic and they had raised over R15,4m since 2011. This would continue as usual.

* The Cape Leopard Trust, an active predator conservation-working group in the Cape, uses research as a tool for conservation and helps to find solutions to human-wildlife conflict. It operates in many of the areas through which the Cape Epic route runs.

* Laureus is a global sports-based charity that works to improve the lives of young people. The charity combines Laureus Sport for Good, the Laureus World Sports Academy and Ambassadors Programme and the Laureus World Sports Awards to form a unique organisation that uses the inspirational power of sport as a force for good. Since its inception, Laureus Sport for Good has raised over €100 million and supported over 150 projects worldwide.

* The Exxaro MTB Academy aims to introduce the mountain biking experience to historically disadvantaged communities and individuals, and ultimately assist to transform the sport in South Africa. It also aims to use sport and a healthy lifestyle to improve people’s quality of life and create change in the lives of communities.

* The Diepsloot Mountain Bike Academy provides basic MTB and life skills training for underprivileged youth sourced from schools in Diepsloot. It provides children with opportunities to participate in recreational and competitive sporting activities that enhance their sense of self-belief and self-respect. Beneficiaries have access to educational support, as well as the transfer of important life skills needed to improve their circumstances.

* Seven times Dusi champion and multisport legend Martin Dreyer launched the Change a Life Academy in 2008 to train youngsters in KwaZulu Natal’s remote Dusi Valley to become competitive canoeists. The Academy has since expanded to include cycling and running and has notched up many outstanding successes. They are also taught life skills.

* songo.info is a social development programme in Kayamandi, Stellenbosch, that provides sport and recreational activities to children, offers them a safe place to play and grow while establishing values of accountability and responsibility, teaching goal setting and instilling in children the ability to dream and go out and achieve their goals.