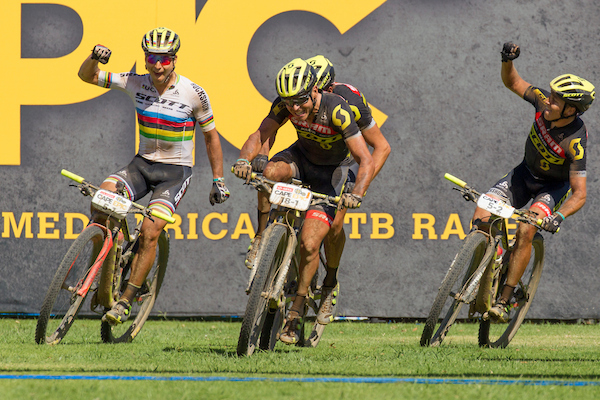 The SCOTT-SRAM Young Guns crossed the line first in a time of 4:10.00,3 with Schurter and Stirnemann popping wheelies (almost into the fencing) right behind them.

Overall leaders Manuel Fumic and Henrique Avancini (Cannondale Factory Racing XC) finished third on the day, two-and-a-half minutes off the pace. Their time was enough to retain the yellow zebra leader jersey, though.

Stage 4 of the Absa Cape Epic was a 112km trek from Elandskloof near Greyton to Oak Valley Wine Estate in Elgin. It was a day that most expected marathon men Christoph Sauser and Jaroslav Kulhavy (Investec-Songo-Specialized) to make their move and knock the cheeky cross-country kings off their perch.

“We never ride with a plan – we just like to ride,” said Schurter. “Today it worked out very well for both our teams, so that’s fantastic. The last big climb was terrible, very sandy, but both our teams seemed to manage it best and we were able to get away.”

The day started cool and overcast – a relief for the riders who have baked in the high temperatures since the Prologue – but as has been the case since the start, the race pace was hot again. For most of the day the elite bunch stayed together, until the surprise leaders of Hector Paez and Max Knox (Kansai Plascon) emerged at the front of the pack. The pair appeared strong and three hours into the day’s racing they had forced a gap of 45 seconds between them and the chasing pack.

The Botrivier Pass, though, had the final say in the matter, as teams took strain up the sandy climb. Both SCOTT teams managed the climb best, while once over the top Investec-Songo-Specialized suffered a torn sidewall. “We woke up this morning with the intention of making a move, and trying to ride into the yellow jersey,” said Sauser. “Jaro must have ridden over 1000 rocks today and right at the end he managed to hit one that tore his sidewall. We used two plugs, but still kept losing air. We put a third plug in, but it cost us a lot of time. Tomorrow will be tough to make up time, but there is still the big stage on Saturday to come.”

Sauser added that, “The racing is fast and very exciting, but to be honest I’d rather have a boring race and be in the lead!” 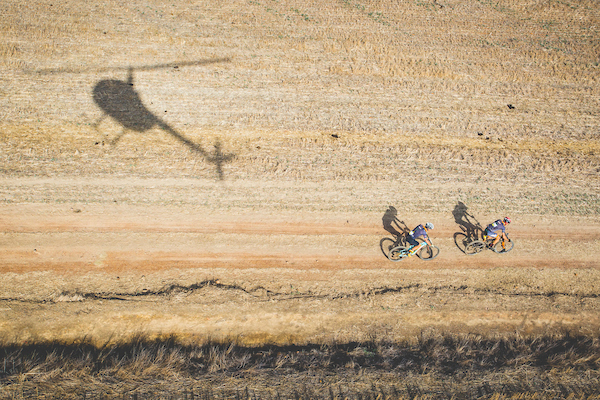 In contrast, stage winner Andri Frischknecht, was thrilled to have an exciting day’s racing. “We are very happy and very surprised. When we looked at the stage – 112km – our main aim was just to survive. But this stage win is amazing; super cool. Riding with Nino and Matthias was great motivation, and when we managed the last sandy climb quite well, we started to think that we could take the stage. It was horrible (up the climb) but we made it!”

Despite appearing to struggle in the latter half of the day, and finishing third on the stage, overall leader Manual Fumic was upbeat about Cannondale Factory Racing XC’s ride. “We thought Nino and Matthias would go for it today, so we just wanted to keep Susi and Jaro in check,” he said.

“We managed to do that pretty well for most of the day, so we are happy again with the result. We weren’t too worried with Scott making up time; we knew we had a decent gap on them. Today was all about managing the pace and keeping Investec-Songo-Specialized close. I would definitely say it’s another good day for us. It’s a long way till Sunday, so today we did not want to waste too much energy.”

When asked why the cross-country teams are doing so well at the 2017 Absa Cape Epic, Fumic replied with a wink and a grin, “Well, we are just the better mountain bikers.”