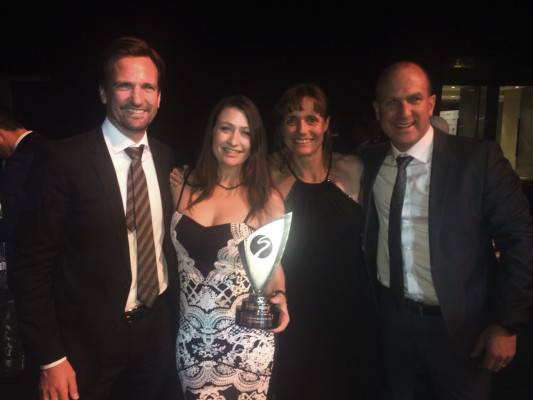 The Absa Cape Epic has walked away with top honours in the prestigious Sport Participation Event category at the Discovery Sport Industry Awards for the second year running.

The awards, which celebrate the most “creative, innovative and commendable” work in South Africa’s sporting sector, were held at the Sandton Convention Centre last night (Thursday, 12 February 2015).

The Sport Participation category is designed to reward events that “demonstrate a commitment to the competitor’s experience and also measures brand awareness and the return delivered to sponsors”, according to the entry criteria.

Kevin Vermaak, founder of the Absa Cape Epic, said: “We’re thrilled to have won the Sport Participation Event of the Year category once again. Our entire concept is built on being a team event – from the two-person team racing format through to the race’s vitally important relationships with its sponsors.”
He pointed to the event’s relationship with sponsor Absa as being a “most important partnership” and added that “we’ve invested everything we’ve got into building this”.
“Our sponsors have become a key aspect of our successful offering: over the years they have enriched the event and many have helped introduce innovations that have changed the face of the Absa Cape Epic.

“But talking about teams, I must also pay tribute to our remarkable staff, officials and volunteers, who work tirelessly throughout the year to make this event the very best that we can offer,” said Vermaak.

Among other innovations since winning the 2014 award, the Absa Cape Epic introduced live tracking of each team, live streaming on the finish line each day and a host of new world class sponsorships. It also introduced equal prize money for the men’s and women’s categories, making it the most lucrative women’s cycling event in the world.
James Monteith, the managing director of the Sport Industry Group South Africa, said: “The industry is growing so rapidly in South Africa, with these awards celebrating that growth, and showcasing the incredible events, strategic thinking and world-class activations we’ve come to expect of the industry.

“The atmosphere at the awards was electric, with the winners being celebrated for their outstanding achievements and triumphs over such hotly-contested categories. Our congratulations go to the entire shortlist, as well as all of our award winners and every member of this incredible industry.”

The winners of this year’s awards were selected from a record-breaking number of entries, judged by some of the most respected names in the sport industry, with the steering and judging process officiated by the independent adjudicators Deloitte.