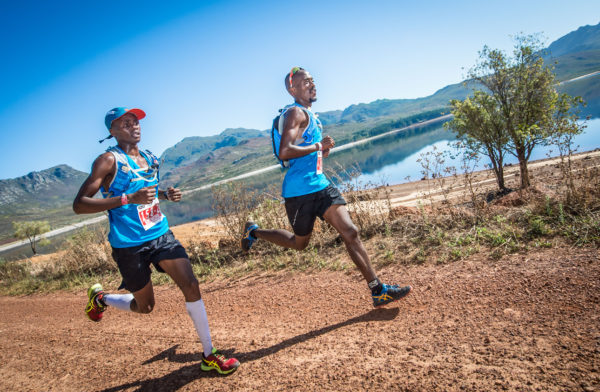 The cream of South Africa’s trail running community will be seen in action at the 9th annual Cell C AfricanX Trailrun presented by ASICS in Grabouw this coming weekend, 17 – 19 March 2017.

Leading men’s teams to look out for will include: Kane Reilly with Thabang Madiba, Givemore Mudzinganyama with Edwin Sesipi, Nicholas Rupanga with Johnny Young and Chris Strydom with Rory Scheiffer.

According to Reilly, AfricanX is completely different to any of the other races on his calendar. “It’s a different kind of experience. It’s extremely competitive, but I always have a good time on and off the trails. We’d definitely like to be on top of the podium after three days, but I’d be stoked with three days of solid racing and feeling good, regardless of the outcome in terms of positions.”

“The vibe in the Festival Village is really special,” says Mudzinganyama. “We love meeting new people and exploring nature from different angles. The event is really well organised, while the routes take you to some beautiful and remote places.   Edwin and I have been training really hard together. We believe that this will give us an edge.”

According to Rupanga, you cannot change a winning formula. “Johnny and I won our category last year. We understand each other. Although experience will be our team strength, we are both versatile runners. Ups, downs, technical or non-technical, we can run it all. Our main goal is to defend our category victory.”

German ASICS FrontRunners, Max Kirschbaum and Christian Alles are sure to cause waves in the men’s race. “Three days, a beautiful landscape and nice people, I wouldn’t miss it,” says Kirschbaum.   “I love nature and I love running. Our team strength will be balance of performance. Our goal will be to go as fast as possible. I’m really looking forward to the experience.”

The AfricanX Trailrun has also attracted the attention of triathletes, Kent Horner and Chris Bruchhausen.

According to Horner, they don’t have any specific goal in mind. “We just want to have a good run in the mountains. Chris is a new kid on the block. He’s a super talented triathlete and runner. It’s more than likely that his raw talent will end up being our team strength.   I fear that our toughest competition will be my wife and her partner. We cannot allow them to beat us.”

No stranger to AfricanX, AJ Calitz has claimed the top step on the men’s team podium since 2014 when he teamed up with Bernard Rukadza. In 2015 Calitz and Rukadza retained their title, while in 2016 Calitz and Ben Brimble were the team to beat.

In 2017 Calitz was hoping to continue his winning streak by teaming up with Eric Ngubane. Unfortunately Ngubane was forced to withdraw a mere one week before the start due to injury. Although disappointed, Calitz was all too happy to sign up for a new challenge, he’ll be seen making his mixed team debut with Nicolette Griffioen.

“Life happens,” says Calitz. “I will be jealous of the men’s teams, but at the end of the day we’re all there to have fun. Nicolette is a really focussed runner. She’s the quiet one, while I’m more out spoken. I’ve already told Nicolette that I’m seriously going to push her this coming weekend. I can’t wait.”

‘Sanet Wentzel Spirit Award’: Introduced in 2010, one year after the AfricanX’s inception, the award was founded in memory of Sanet Wentzel (Oudtshoorn), an AfricanX participant who passed away tragically at the end of 2009 after being

knocked down by a car during a morning training run. The award also honours current runners who persevere irrespective of the adversity that they face.

Trail runners taking part in the 2017 Cell C AfricanX Trailrun presented by ASICS are encouraged to send their ‘Sanet Wentzel Spirit Award’ nominations (with a short motivation) to dom@stillwatersports.com

Entries are LIMITED to 350 teams.