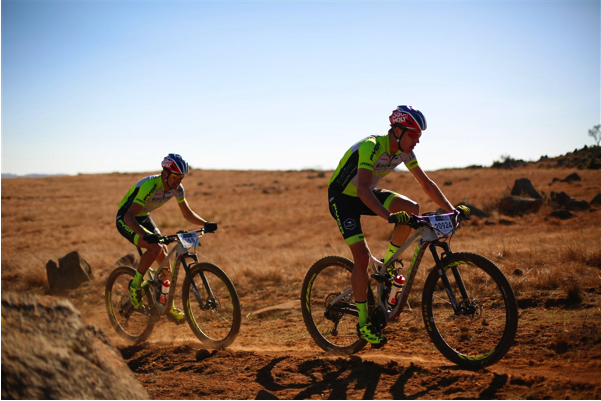 Philip Buys extended his lead in the 2017 Ashburton Investments National MTB Series when he played the perfect hand on Sunday’s second stage and toppled overnight leader, Gert Heyns in a decisive battle at Dullstroom, Mpumalanga on Sunday.

After finishing third on Stage 1 on Saturday, Buys (Pyga Eurosteel) started Sunday’s leg 22 seconds back and in aggressive mood, setting the pace from the start with his Pyga Eurosteel teammate, Matthys Beukes and putting Heyns under constant pressure.

But Buys and Beukes were simply too strong and they completed the perfect double with Beukes claiming the stage win and Buys grabbing second place and the overall title. It was the appropriate reprieve for Beukes who suffered a broken wheel while battling upfront during Stage 1 and was forced to withdraw from the stage.

On Saturday, Heyns outsmarted his rivals to grab the stage win in the 70.5km leg and secure the overnight lead. He was followed by Nico Bell (Team NAD Pro) and Buys respectively. But the Pyga Eurosteel pair was just too strong on Sunday’s 62.4km route, claiming the top two spots.

Bell finished third on Sunday to secure second overall for the two-day event, with Heyns in fourth and Gawie Combrinck (Team NAD Pro) rounding out the top five respectively on the second day. In the overall though, Heyns finished third, Combrinck fourth and Dylan Rebello (Imbuko Momsen) fifth.

“It was quite a good day for us obviously. I almost feel bad. Yesterday I only did half the race, so I was a lot fresher than the other guys. You could clearly see that today. Those are the rules and we can play that,” explained Beukes

The Ashburton Investments National MTB Series rules for its two-day event permit a rider to compete on Day 2 even if they don’t finish Day 1. Series points are allocated for each day’s performance as well as for the combined result for the two-days.

“My first objective was to look after Phil today and make sure he closed the gap on second and first overall after Day 1. My second objective was for me to take the stage win, which I did, which is quite nice and it will help add to my overall series points,” added Beukes.

“The scenery around Dullstroom is really nice. It feels like you are riding on top of the world. Thanks to Advendurance for more amazing routes. We rode some awesome trails out there,” said Beukes.

“Yesterday our tactic didn’t really work out as planned, but today it worked out perfectly. Glad to take the overall win and a great stage win for Matthys,” said Buys.

“Advendurance put on another good event. It’s tough racing at altitude. The climbing is good here and add in the wind and you have a proper challenge when racing here,” added Buys.

“The racing was great. I’ve never really had a good result at Dullstroom, so it was good to finish second overall. The Pyga guys made the pace really hard. Matthys was quite fresh after not being able to finish yesterday’s stage. With this wind, it made the race even harder, so it was definitely a difficult race,” said Bell.

“Gawie is getting back to full strength. He helped me quite a lot at the beginning of today’s stage. It’s great to have us both finish in the top five. Very good for our sponsors and our team,” added Bell.

The seventh and final round of the Ashburton Investments National MTB Series 2017 will take place on 14 and 15 October. The venue is Kaapsehoop, near Nelspruit, Mpumalanga. For more information or to enter, visit www.nationalmtbseries.com