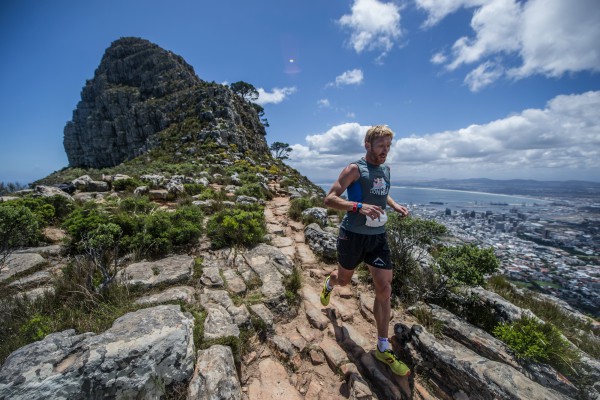 CAPE TOWN (South Africa) – The fourth edition of Red Bull LionHeart will take place on Sunday 6 December 2015 and – the undisputed King of the Lion – Andre ‘AJ’ Calitz, will be back to defend his title. Calitz completed his hat trick in 2014 by out-gunning Thabang Madiba for the win in a new record time of 25:54. That final was a thrilling climax to a day of exciting elimination format racing and if it’s anything to go by, the 2015 edition is going to be a fast, close-fought affair.

Calitz commented how he loves “the surfing style heats that pit man-against-man.”

“It is one of my favourite races of the year and I really want to defend my title,” he said.

The race concept was the brainchild of Ryan Sandes who wanted to create a fun, innovative event where he could share the mountain with as many people as possible and formalise (without compromising its core roots, of course) #TamingTheLion, the underground time-trial up-and-back from the SanParks hut.

In keeping with the spirit of evolution on the event, 2015 will see even more runners compete on race day, with the top 100 men qualifying to race, based on the Strava qualification leaderboard. On race day, those who make the cut-off of 33-minutes advance to the main event, with the top half racing for the Elite title and the bottom half, the Intermediate (a category which was introduced in 2014).

The top 30 women also qualify based on Strava leaderboard and hot favourite will no doubt be two-time defending champion Landie Greyling. “I love the adrenaline rush, the unique format, the absolutely beautiful trail with the majestic view at the top as reward after busting your lungs.

While the knockout format race on the day will be on the route up-and-down Lion’s Head, the qualification route is the same as in 2014, around the base of the mountain on the track known widely as ‘Pat’s Track’. The route offers fun but technical singletrack with 164-metres of climbing over the 3,3-kilometre route.

Calitz is positive about his chances, but believes the LionHeart route and format doesn’t necessarily favour only trail runners. “The trail runners are always strong, but look out for the roadies and triathletes on the day,” he said.