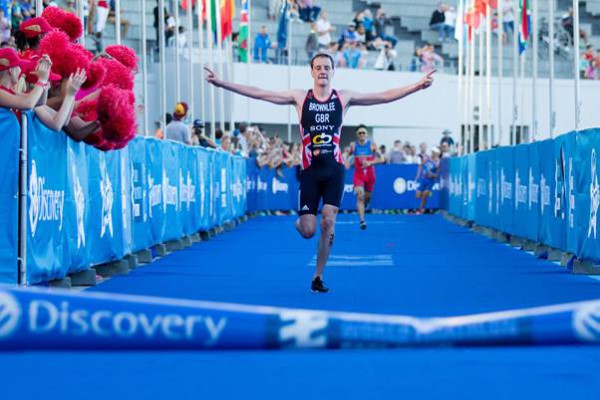 Not even a stumble on the run could stop Alistair Brownlee‘s return to the top of the World Triathlon Series podium in Cape Town on Sunday, as the most successful athlete in series history took his total number of titles to 18.

While he tripped early on in the run, Brownlee made his way up to the lead group of Javier Gomez Noya, Richard Murray and Vincent Luis quickly, before blowing them away in the final 1500m. In his first WTS race in 2015 after returning from injury, Brownlee said he wasn’t sure what to expect, but was obviously thrilled with the result.

“Of course you never know, all you can do is train as hard as you can and put everything in that you can on the day. I knew I wasn’t that fit and I didn’t have good legs in that first lap to be honest… The whole thing was tough, but I’m so glad to have the win,” Brownlee said.

In the one-lap 750m swim, shortened due to weather conditions, it was the reigning Cape Town champion who took the race out strongly. Gomez led in the field from the swim, followed by France’s Dorian Coninx and Aurelien Raphael, Russia’s Dmitriy Polyanskiy and Spain’s Francesc Godoy. However the shortened distance did nothing to split the field and a lead group of around 45 athletes formed on the first lap.

While the lead group initially pushed out an advantage of 35 seconds in the first two laps, the pace slowed and the chase caught their tail. This meant that for the majority of the remaining six bike laps, the lead group included almost the entire field. While Brownlee, Murray, Alessando Fabian, Jonas Schomburg and others tried at times to breakaway, none of them stuck as the group seemed content to stick together until the second transition. 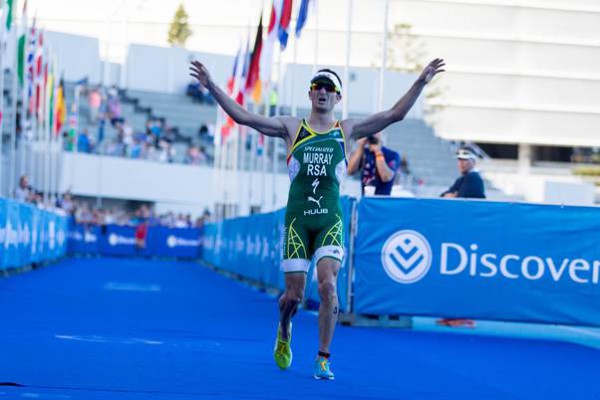 In a busy T2, positioning was crucial and it was Brownlee who didn’t miss a beat on his return. Despite his lower than usual start number putting him in the middle of a busy transition, he negotiated it smoothly and hit the run first.

Early on, a lead group of six set themselves apart from the field. Led by Brownlee, Gomez, Murray, Fernando Alarza, Vincent Luis and Pierre Le Corre set a torrid pace. One lap in saw Le Corre dropped, and Murray move to the front in front of a thrilled home crowd.

On the next lap Alarza fell back, leaving it to four, before Brownlee took an uncharacteristic stumble. That saw him lose touch with the leading trio, but not for long, as he propelled himself back into the lead within the lap. With 3km to go, Luis fell off the front, which seemed to leave the fight for the podium to Gomez, Brownlee and Murray.

Up until the 8km mark it was hard to split that trio, but then with about 1.5km to go, it was Brownlee who simply found another level. In just 500metres, he had eeked out a huge gap on Gomez and ran in to comfortably win in a time of 1 hour 39 minutes and 18 seconds. It concluded a successful comeback weekend for British Triathlon, with Vicky Holland taking the women’s Cape Town race on Saturday, in her first race back after injury.

Behind Brownlee, Gomez finished strongly to claim silver and take over the lead in the Columbia Threadneedle rankings.

While already a multiple World Triathlon Series medallist in sprint distance races, Vincent Luis was yet to take one in Olympic distance. That all changed in Cape Town when he staged a final lap comeback, overtaking Murray to capture bronze.