All tracks lead to Van Gaalen for SA Marathon Champs 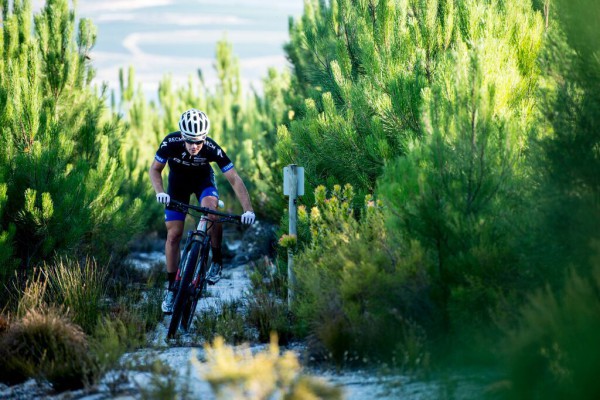 With a hat-trick of victories in his sights RECM Team’s James Reid is not over extending himself in preparation for the Ashburton Investments National MTB Series Van Gaalen, which doubles up as the 2015 South African Mountain Bike Marathon Championships powered by Stihl on 6 June. – Craig Colesky/
Gameplan Media

Van Gaalen – With the online pre-entry list at the 2200 rider mark, all the top names in mountain biking in South Africa will make the North West Province their home this weekend as they gear up for the 2015 Ashburton Investments National MTB Series Van Gaalen, which doubles up as the South African Mountain Bike Marathon Championships powered by Stihl on Saturday 6 June.

Both the men’s and women’s defending champions will be present at the race with men’s two-time defending champion James Reid having just returned from a two-week stint in Europe which included racing at the opening two legs of the 2015 UCI MTB World Cup.

The Team RECM rider has had a quiet build up to this year’s National Championships as far as marathon racing goes and has not put any pressure on himself to claim that elusive hat-trick of titles.

Women’s defending champion Robyn de Groot has, in contrast to her male counterpart, had a disjointed build-up to the event and has been hoping just to be fit for the race however with a good win at the FNB Magalies Monster recently, the Ascendis Health star will be on the start line and searching for another national title.

Evans has singled out Knox as the man to beat and the latter has mentioned that winning the South African Marathon National title for a second time is definitely a major goal of his for 2015.

Other names that have been thrown into the mix are the likes of recent Nedbank sani2c champions Darren Lill and Waylon Woolcock. The duo were in fine form over the three days of racing from the foothills of Sani Pass to Scottburgh recently and cannot be counted out.

James Reid’s RECM team mates Nico Bell and Erik Kleinhans are another pair that will be out to prove that they can take on the best in the country and with three riders from the same team, the dynamic at the front of the race should prove interesting.

The South African riders will not only have themselves to compete with though as Swiss ace Konny Looser has also added his entry into the mix. Although the Wheeler iXS rider cannot win the South African national title, the man currently leading the 2015 Ashburton Investments National Series standings will be difficult to beat over the 111.28km course.

The ladies race will be just as hard-fought with a number of riders vying to pip De Groot for the national title, including Nedbank sani2c champion and former South African Marathon Champion Cherise Stander. Stander also claimed the inaugural KZN Autumn Series road race victories in the Freedom Day Classic and the Hibiscus Coast Cycle Challenge.

The Team RECM rider has been in fine form in 2015 and will be one of the riders that De Groot is going to have to look out for when the 75km women’s clash gets underway while the second challenger to the title is expected to be Bianca Haw.

The young Red Bull/Specialized rider recently claimed the African Continental Cross Country crown in tough conditions in Rwanda and rode to a fifth place at the Nedbank sani2c with Candice Neethling however despite her age and marathon nationals inexperience, the 19 year-old could prove to be a tough opponent on Saturday in her first elite national marathon championships.

The trails around the Van Gaalen Cheese Farm will be packed with riders over the weekend as the event draws a record field with a number of different categories fighting it out over varying distances throughout the day.

Late entries will be accepted on the day, with an additional nominal fee of R50. This event is not limited to the championship contenders and is open to the public.

For more information, including the programme of events, visit http://www.cyclingsa.com/2015-sa-mtb-marathon-champs and http://www.nationalmtbseries.com/theseries/races/vangaalen.