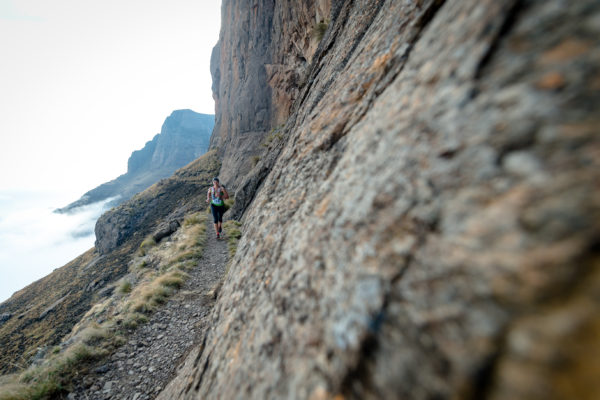 Over 300 first-timers huddled amongst the record sold out field in the early hours of Saturday, 10 September, to take on the mighty Old Mutual Wild Series Mont Aux Sources Challenge.

Held in the Royal Natal Park in KwaZulu-Natal yearly, the 50km mountain run sees trail runners tackle a gruelling climb to the top of the Amphitheatre, reaching the high point at 3100m above sea level, before heading back to the finish at Mahai Campsite along the same route.

This year the weather put on a show, with runners experiencing all four seasons in one day, from misty, cool conditions in the race village at Mahai Camp, to freezing, rainy conditions at Sentinel Car Park. For the middle and back of the pack, the cloud cover lifted at an opportune moment in the race, allowing them to take in the spectacular views of the Witches, the Sentinel and Western Buttress, as well as the panoramic view from the top of the Amphitheatre.

The sunshine certainly lifted the spirits of the runners, with a small group even stopping to build a snowman in a patch of snow they found just before descending the Sentinel Gully, a technical, rocky descent that linked runners onto the return path.

“It was a brutal but beautiful event,” said Bryony McCormick, a first-time Mont Aux Sources finisher (in a time of 8:56:00). “The weather was crazy, and the climb brutal but so worth it for the views from the top, a view that will be imprinted in my mind for a long time to come.”

Four-time winner and 2015 defending champ, Eric Ngubane, took the men’s win in a time 4:42:00, with 24-year-old Rory Scheffer hot on his heels finishing in 4:45:40. Local runner Philani Shabalala finished in third place in a time of 4:55:09. The women’s race was equally as exciting with Holly Page from the Britain taking the win, breaking the existing record by 34 minutes in a time of 4:59:00. Kerry-Ann Marshall finished second in 5:17:17 with Ann Ashworth taking the final podium position in a time of 5:26:03, both also under the record time.

Having a record sold out year meant great things for the Bearded Vulture Project, as a portion of each entry fee goes towards supporting this incredible project that is aimed at conserving the critically endangered species. “With more and more species being added to endangered lists around the world, it is essential that we look at conservation within our own country. As a brand and company that has stood the test of time, Old Mutual is proud to be involved in the Wild Series and to play a part in their ongoing conservation efforts,” say Old Mutual head of brand, Karen Thomas

The next Wild Series event on the calendar is the Old Mutual Wild Series Golden Gate Challenge, a three-day stage run through the Golden Gate Highlands National Park in the Free State. Runners take on 70km of high altitude, off-road trails over three days, in the process getting a unique opportunity to experience parts of the park that aren’t accessible to the public.

“Entrants of the Golden Gate Challenge can expect challenging terrain, with some steep climbs and descents, but that’s just the reality of the mountains,” says Andrew Booth, Wild Series race organiser. “It isn’t so ridiculously difficult that people will lose their sense of humour though, and you can expect lots of awesome views, especially when you go as high as 2600m above sea level.”