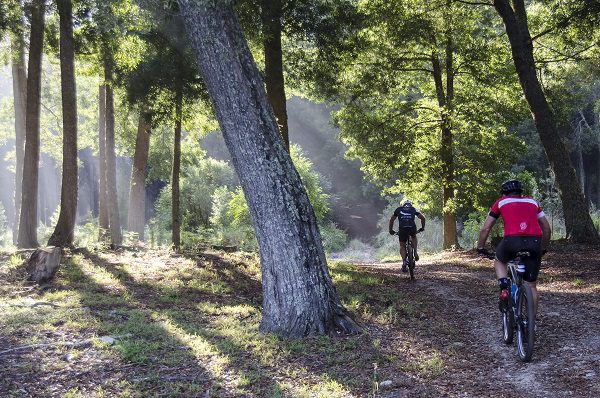 Stage one of the GR300 will take riders through many natural trails under the tree canopy of Knysna’s indigenous forests. Photo: Julie Ann Photography

Most mountain bikers probably follow the normal course of the popular red route in the Harkerville forest outside Knysna, but Garden Route 300 race director Patric Mosterd feels they have hit on a winner by doing it in reverse.

After changing the direction of the 24km loop over the past two years when it formed part of the race’s first stage, Mosterd said they would persist with that option when the three-day race is staged from April 28.

He said the red route would therefore again form part of the feature event’s 75km opening stage, after which riders would tackle 50km and 75km stages on days two and three.

“What is nice about doing the red route in reverse is that it makes the section completely different from the normal offering,” said Mosterd.

“Everyone loves riding in the Harkerville forest and the red route is an iconic trail in our area.

“It puts a different spin on the opening day and it flows quite nicely with the rest of the stage, which has amazing forest scenery. It’s been a winner and something we are sticking with.”

Besides the red route, Mosterd said the nature of the stage enhanced their objectives of providing the riders with a memorable mountain biking experience.

“The route does undulate quite a lot because you can’t get away from the fact that the area surrounding Knysna is very mountainous,” he said.

“Many of the routes are natural single-track and pretty soft underfoot, which means there is not much danger of encountering tricky rocky conditions.”

Most of day one, he added, flowed under the tree canopy, exposing riders to trails through Knysna’s spectacular indigenous forests.

“This includes long stretches of single-track covering about 8km at a time, which is genuine forest riding,” said Mosterd.

“Not only are there the Harkerville trails which were purpose-built, but the route also takes riders on natural trails created by people who harvested trees in the past and dragged them through the forest.”

After the inaugural race took place in 2011, the organisers introduced a Lite version three years later to accommodate a wider range of riders.

Mosterd said the Lite, over 170km, would start at the same time as the feature race and use the same water tables.

“The only difference will be that it cuts out some of the more technical sections and one or two of the tougher climbs.”

The first stage will start and finish at the Knysna Yacht Club, which will also be the venue for the race registration.

Entries close during the week leading up to the event, but there is an April 10 cut-off for those wanting to qualify for the Capestorm garment.