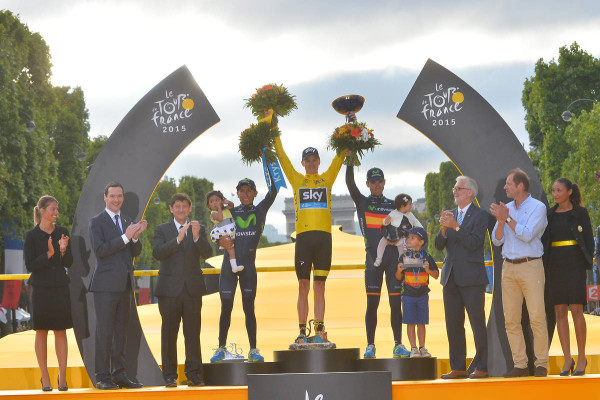 On a rainy day in Paris prior to an evening sunshine at the time of the final presentation, Chris Froome (Team Sky) was crowned the winner of the Tour de France for the second time. His impatience to secure the overall classification was cut short as the referees took the times at the first crossing of the line on the Champs-Elysées. André Greipel (Lotto-Soudal) won the final bunch sprint to clinch his fourth stage victory and the sixth for a German rider out of twenty since the Grand Départ in Utrecht.

160 riders started the 21st and last stage of the 102nd Tour de France. Team Sky showed up with special jerseys with a yellow band to celebrate Chris Froome’s victory. Due to the rainy conditions, the judges decided to take the final times at the first crossing of the line on the Champs-Elysées at km 21 of racing but the riders still had to complete the ten laps of the Parisian circuit. Andriy Grivko (Astana) won the intermediate sprint ahead of Merhawi Kudus (MTN-Qhubeka), after which Sylvain Chavanel (IAM Cycling) launched the first attack with 51km to go. The Frenchman stayed away for seven kilometers.

Oliveira, Vachon, Van Bilsen, a trio at the front

Three riders succeeded to him at the front: Florian Vachon (Bretagne-Séché Environnement), Nelson Oliveira (Lampre-Merida) and Kenneth van Bilsen (Cofidis). They got a 30 seconds lead but the Lotto-Soudal team of triple stage winner André Greipel set the pace of the peloton. Inaugural time trial winner in Utrecht Rohan Dennis (BMC) counter-attacked and made it across to the breakaway group with 12km to go. Van Bilsen and Dennis remained at the front until the 5km to go mark as the weather finally became sunny in Paris.

Katusha led Alexander Kristoff from far out but André Greipel managed to win his fourth stage of this year’s Tour de France (ten in total) despite Bryan Coquard’s final rush. Chris Froome was declared the overall winner of the 102nd Tour de France and the King of the Mountains, Peter Sagan the points competition winner for the fourth straight time, Nairo Quintana the best young rider, Movistar the champions of the teams classification and Romain Bardet the most aggressive rider of the whole race.