Andrea Steyn banks on teamwork for 947 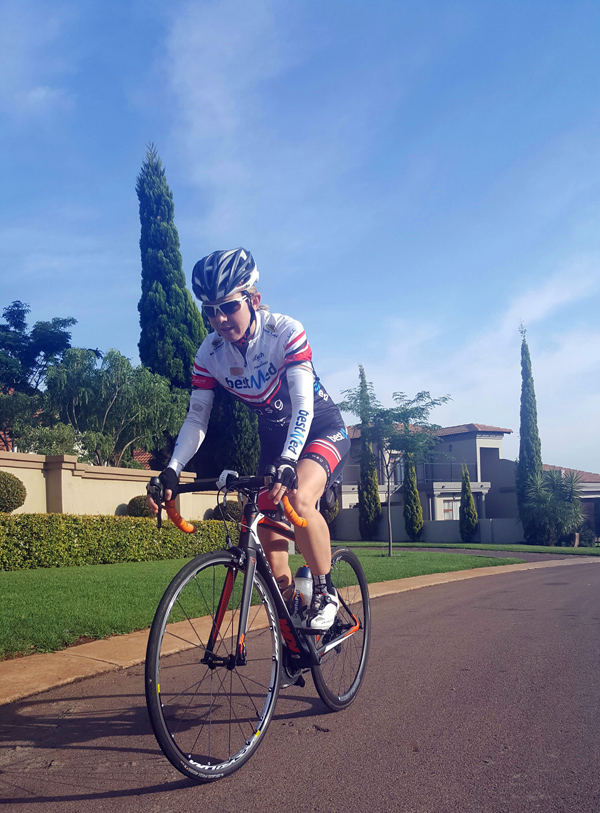 Andrea Steyn will be linking up with Team Bestmed-ASG for the 947 Challenge on November 20. Photo: Supplied

After sprinting to a podium spot in last month’s Bestmed Satellite Classic, Andrea Steyn is excited to be working with Team Bestmed-ASG again when the 947 Cycle Challenge takes place in Johannesburg on November 20.

Invited by team manager Owen Botha to join the squad for selected races, the 32-year-old from Monavoni in Centurion, who is primarily a triathlete, linked up with the outfit for the first time at the Satellite Classic near Hartbeespoort Dam.

They helped her finish third behind national star Lise Olivier and Ethiopia’s Eden Hailemariam and she said she was looking forward to benefiting from the team ethic at one of South Africa’s leading national classics.

“It was great to have a following vehicle – for the first time ever. I’m not used to that,” said the former African triathlon champion with a laugh as she reflected on her ride at the Satellite Classic.

“The team was very supportive, especially in the first part of the race. You just feel so comfortable if you have someone to assist you if you need to go to the front.

“They are a wonderful bunch of girls and I’m looking forward to riding with them again at the 947.”

Steyn notched up fifth place in last year’s 947 Cycle Challenge and said she was hoping to improve on that.

“Things worked out quite well for me last year and my objective this time is to stay with the front bunch until the end because it can get quite tough towards the finish.

“But there are so many things that can play a role in cycling so you can never be sure what might happen.”

With her focus on triathlons, in which she competes on most weekends, Steyn she had not been able to train as much on the bike as she would have liked.

However, she felt she was in “reasonable shape”.

“The Bestmed Satellite Classic was a good test and I was a bit surprised I had such a good race.

“There was a long climb when seven girls broke away and I managed to stay with them so I’m happy with my form.

“I’m doing a lot of cycling now so hopefully that will help me to get an edge in the 947.”

With Ashleigh Moolman Pasio – who placed 10th in the road race in Rio – not defending her title due to injury, Steyn singled out Olivier as the rider to watch.

“Whoever can climb and have strong legs towards the end is going to play a huge role,” she said.

“Lise is very strong at the moment. She has done a lot of cycling in Spain and to me she is really a hot favourite.”