The 5th round of the Ashburton Investments National MTB series took place in Ballito, Kwazulu Natal on the 26th of July. The race offered riders who missed a previous round an opportunity to make up some valuable points in the series.

Ariane Kleinhans returned from Europe on Thursday before the event, fresh from a very successful racing and training block. Cherise Stander and Erik Kleinhans returned back to South Africa from their perspective European campaigns to join Nico Bell and Ariane in Ballito, completing the Team RECM marathon contingent for the 5th round of the series.

The men set of proceedings, starting the 105km course with 2100m of ascent in a water logged Ballito. From the offset it was clear that it would be a tough day for riders and machines alike. Nico Bell suffered a technical early on and rode without a saddle for a big part of the race. A quick stop at the Tech Zone put Nico back into the fight and he managed to work his way through the field to finish in 5th place.

Erik Kleinhans held a solid pace and rode with the lead bunch until the mid way point. Conditions made it hard to follow the attacks and after being dropped from the lead group, Erik rode home to an 8th position. 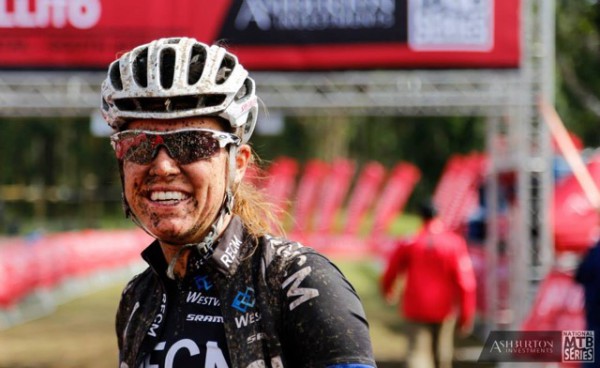 The women’s race was a hotly contested affair. Cherise, Ariane and Robyn De Groot are all in excellent form and they distanced themselves from the rest of the field early on. Ariane describes the race:

“The marathon with only 1200m of climbing in 74km was pretty flat, but the wet and windy weather conditions made us work hard for our USN recovery shake at the finish.

The flat route made it a tactical affair and the deciding move only came late in the race.

Cherise and I could get a small gap on Robyn after the QOM (20km into the race). We tried to distance her by working together on the open roads, but Robyn managed to catch up again after Cherise crashed in one of the slippery downhills.

With 20km to go Cherise and I again got a gap to Robyn. Now we pushed really hard to stay away. Up a long drag, Cherise had to drop my wheel and I could take the lead to the finish.

I was super happy with my tire choice, the Specialized Ground Control 2.1 in the front and Fast Track 2.0 with Grid casing at the back. It’s not the lightest combination but it gave me a lot of confidence in the slippery and rough conditions at this race”