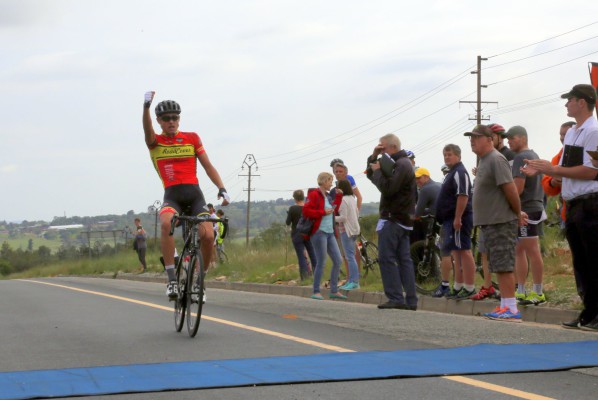 Gustav Basson splits his team between Pretoria and Middelburg in Mpumalanga

The former U19 national time-trial champion showed his skills against the clock when he escaped late in the race from a five-man breakaway group – which included teammates Clint Hendricks and Kent Main – to take a comfortable win at Cradlestone Shopping Mall.

Basson said everyone was already on the limit on the first climb out of Krugersdorp and then Main attacked towards the top. “Clint went with him straight away and then I decided to ride over as well.”

The RoadCover riders were joined by former champion Calvin Beneke and JC Nel to complete the breakaway group at the head of affairs. “We built a two-minute gap and then Kent got away in the cradle after about 75km,” said Basson.

“We caught him just before he exited the cradle and I immediately went with a flyer to keep the pressure on the other two. Fortunately they couldn’t catch me and I stayed away.

“I knew they had spent a lot of tickets to catch Kent, so I felt I had a chance. I still had a lot of power and didn’t feel like I was about to bonk and that gave me confidence.”

Basson, who divides his time between Pretoria and Middelburg, said he was “pretty stoked” with his first elite victory. “It is a great result for the team and everyone involved.”

He said he felt strong in team training and thought he had a shot if everything went is way. “My form is better than last year this time, but it is always difficult as it comes down to whatever is best for the team.”

It was the 19-year-old’s first elite victory and he will take a lot of confidence into next week’s national road championships, where he is aiming for podiums in the U23 time-trial and road race.

But he sees the five-day international Bestmed Tour of Good Hope at the end of the month as his main target en route to establishing himself as a tour rider. “I was sixth on GC last year and I think a podium or win is possible.”

Hendricks turned a good day for RoadCover into a great one when he won the first leg of the inaugural ProTouch National Criterium Series, presented by Liberty, at Silverstar Casino directly after the road race. The women’s event was won by Madelaine Snoer.