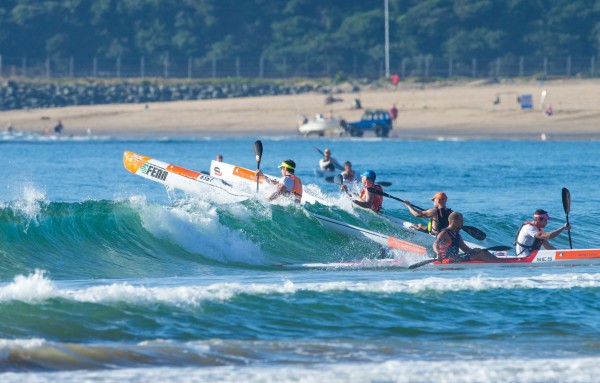 Durban – Hundreds of paddlers are expected to return to Durban’s ocean racing scene this Sunday when the annual five-leg Bay Union Surfski Series gets underway at Marine Surf Lifesaving Club, Addington Beach with the Bay Union Season Starter, signalling the start of the autumn surfski season.

Organisers have done away with the traditional series log standings and prizes, paving the way for local surfski enthusiasts to focus their full attention on each of the races’ unique paddling experiences over the coming five Sundays.

Renowned for its spectacular conditions at this time of the year, Durban’s bay offers the perfect, protected stage upon which all the action can unfold while the iconic Golden Mile, Moses Mabhida Stadium and the spectacular cityscape provides the ideal backdrop.

“We are extremely privileged to be able to have such incredible conditions at our disposal here in Durban during the autumn and winter months and thanks to the generous support of Bay Union, we are thrilled to host KZN’s surfski community for what promises to be another fantastic five weeks of racing,” explained series organiser, Barry Lewin.

“We’ve changed things up a little this year, with the focus of this year’s series being all about paddlers enjoying what each of the individual races have to offer,” he added.

As a unique theme runs through each of the five races, paddlers can look forward to enjoying many of the various elements that make the sport so popular on the East Coast.

“Sunday’s race is all about embracing the fun that comes with the sport of surfski,” said Lewin.

“We have prizes for the best dressed paddlers, spirit awards and a special family category which, together with some great new course routes, should get the series off on a really fun, relaxed, family orientated note – the essence of why many of us paddle!”

Sunday, 24 April’s Bay Union King of the Bay presented by Zurich provides paddlers with a once-a-year opportunity to paddle across Durban’s harbour and out the mouth to sea – an annual highlight for many – while race three, the Lion of Africa Surf Challenge on Sunday, 1 May takes participants back to their paddling roots and tests their basic ocean paddling skills.

“The King of the Bay is such an iconic Durban event and one not to be missed!

“The Lion Of Africa Surf Challenge will see participants make multiple turns in amongst the waves, taking paddlers back to the lifesaving ‘around the cans’ heritage of the sport.

The final two events of the popular autumn series then focus on teamwork as paddlers tackle the Bay Union Dairy Doubles Challenge and Bay Union Team Challenge on Sunday, 8 May and Sunday, 15 May respectively.

“We have such a strong doubles racing culture here in Durban and yet very few dedicated doubles events.

“The Dairy Doubles Challenge at Durban Surf should be a fantastic day’s racing where some of the country’s, if not the world’s, top doubles crews go head-to-head while the competitive vets and masters age groups also promises to serve up some fierce competition.

“The concept of a Team Challenge was born a couple of years ago and this year’s event is a refinement of that.

“Much like how mountain bike stage races are run, teams will consist of two skis – either singles or doubles – with both craft needing to cross the line within a boat length of the other to qualify for the prizes.

“Paddlers having to work together whilst also trying to compete against the other teams around them is a novel concept to surfski paddling and we cannot wait for the action that the format promises to produce!” said Lewin.

More information can be found at www.pitchandpaddle.co.za