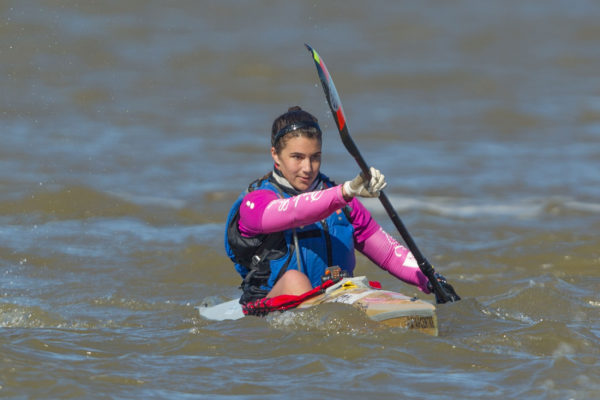 Robertson – As the 2016 ICF Canoe Marathon World Championships in Germany begins to loom large, Team South Africa’s Bianca Beavitt has singled out the upcoming Breede River Canoe Marathon as the ideal opportunity to get miles under her belt in the build up to the marathon showpiece in Europe in September.

Beavitt, who won the women’s K3 titles at the Breede in 2015 with Robyn Henderson and Jane Swarbreck and finished third overall in the K3 contest, is looking forward to the K2 championship river marathon which takes place over the first weekend of September being a positive Worlds training exercise after she was unable to tackle the Western Cape event with her World Championship doubles partner, Nikki Russell.

“After Berg, Nikki (Russell) and I made the decision that we were going to paddle Marathon Worlds in a K2 together and we were hoping to get in a boat together before then,” an expectant Beavitt mentioned.

“Unfortunately we aren’t going to race together at Breede but we will still have some time to work out some issues before we go to Worlds.

“Breede will still be a good chance for me to get some good miles in the body before Germany though, even though I’ll be in my K1.”

The Century City/Pink Lady paddler, who cruised to a second Berg River Canoe Marathon title in July, has tapered off after the gruelling four day race through the Swartland, but has kept a continuous eye on the international showpiece in September.

“I took a bit of a break after Berg considering that was a major focus for me in the first part of the season.

“I have been working my way back into racing with a few of the weekend races in the Cape recently though.

“My time trial times keep improving and I have been working really hard in the last couple weeks with my eyes set on Germany.

“Even though the Breede is more geared towards K2s and K3s, it is going to be a great training exercise for me and I am going to test myself against all of the top K2s to see where I stand at the moment,” added Beavitt.

Despite the lack of rain that the Western Cape has experienced throughout their rainy winter season, many believe that the Breede will be of racable level come the first weekend of September and Beavitt echoes these sentiments.

“We had some good rain last week, which was good for us during this pretty dry period.

“If we get some more good rain then conditions will be great for racing.

“I personally hope that they will be good as I have never raced the Breede in a K1 before, so it’s going to be quite an experience!” she commented light-heartedly.

Flat water marathon paddling places great emphasis on the short and sharp portages and so homing those skills is important.

“The Breede is not as flat as the Berg but it will still be good for my marathon training.

“The first day has a few rapids but day two is quite flat, which will be good for me.

“I have been putting some time into slickening up my portage skills for Worlds and I am hoping that they are up to scratch when I get to Germany while hopefully this mileage will help with my paddling.

“We are heading into the final preparations for Marathon Worlds and I am hoping that I can get the required result from Breede as I look towards Germany next month,” an excited Beavitt concluded.