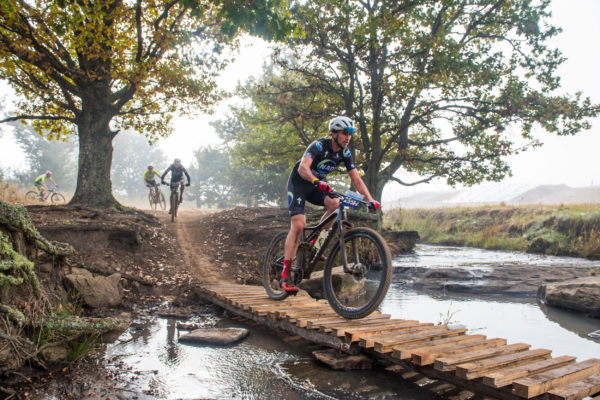 NAD Pro MTB Team’s Matt Beers (front) will line up for the 2019 KAP sani2c with accomplished cross country rider Stuart Marais for the showdown from 16-18 May. Anthony Grote/
Gameplan Media

HImeville – After a while deliberating who was going to partner defending KAP sani2c champion Matt Beers at the 2019 edition, talented cross country rider Stuart Marais will form the second half of the team for the three-day shoot-out from Glencairn to Scottburgh from 16 to 18 May.

Beers and team mate Nico Bell took the NAD Pro MTB Team to the top step of the podium in 2018 despite the pressure from a number of other top teams and Beers is keen to repeat that feat, unfortunately it can’t be with his partner from 12 months ago.

Bell is off the bike at the moment and Wessel Botha is away which left Beers fairly high and dry.

“Nico is currently recovering from surgery and Wessel (Botha) will be racing in the World Cups overseas so that is why I am racing with Stuart,” Beers said.

“Stuart is a really strong rider and is good in the technical stuff so I think that we are going to make a good team for sani(2c) this year.”

The NAD Pro MTB Team lost stalwart Gawie Combrinck recently when he retired from professional racing so Beers was fishing for a partner, arguably the most in-form marathon rider in the country after his Africa Jersey triumph at the Absa Cape Epic earlier in the year.

Despite the change in team make-up the goals remain exactly the same.

“The aim is to win the race again because our team are the defending champions and we are feeling good going into the race.”

The pair recently finished fourth and fifth respectively at the African Continental Cross Country championships in Namibia which shows that they are an evenly matched pair.

Defending his crown is going to be a tough task for Beers with some of the country’s best mountain bikers vying for that top spot on the podium come Saturday.

Marais, who has mixed it up with the best in the world on the cross country circuit, and is a KwaZulu-Natal resident has never ridden the KAP sani2c but it is a race that he knows and it has always been on his bucket list.

“I grew up in Ixopo so I know the sani2c well and it has been unfortunate that it has taken this long for me to ride it,” Marais said.

“It was such an easy decision to make when Matt asked if I wanted to ride with him and it’s an incredible opportunity to race the country’s best over three stages.”

Marais and Beers will form a fairly formidable combination despite the fact that Marais isn’t too familiar with stage racing. He will have more than enough support from Beers and the NAD Pro Team.

“Matt is the stage racing king and we know how strong a marathon racer he is.

“I am feeling pretty strong at the moment too and we have raced each other in the past so we have an idea about strengths and weaknesses.

“It’s going to be an awesome experience and I’m so grateful for the chance to race with Matt and the team,” Marais added appreciatively.

NOTE:
If media have any queries or requests before or during the 2019 KAP sani2c please do not hesitate to contact Nick Tatham (083 610 1232) or email on nick@gameplanmedia.co.za