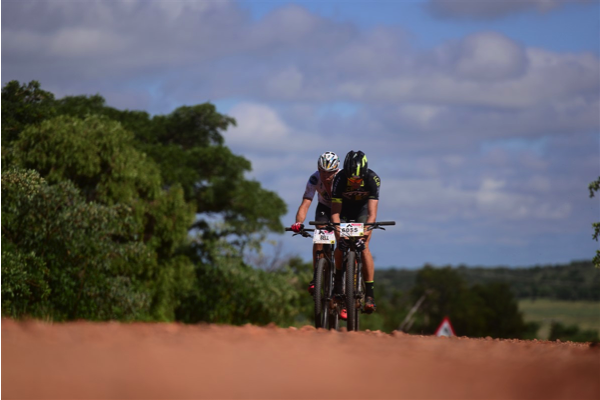 Nico Bell letting Philip Buys lead most of the last half of the race, allowing Gawie Combrinck to close them down and catch them as they hit the final kilometre.
Photo Credit: www.zcmc.co.za

Nico Bell and Monica Glover closed out the final round of the 2016 Nissan TrailSeeker Gauteng Mountain Bike Series with victories in the 68km men and women’s marathon distances at Cullinan, near Pretoria at the weekend.

Much-needed rain in the drought-stricken province in the lead-up to the race left the riders to contend with muddy conditions, which added the difficulty factor somewhat on an already challenging route.

In the men’s race, Bell’s Team NAD teammate, Gawie Combrinck set a rapid pace from the start. This resulted in a three-rider split off the front with Philip Buys (SCOTT LCB Factory Racing) and Bell the only riders able to stay with him.

Buys attacked as the trio exited the Little Eden Gorge on a technical climb, but Bell and Combrinck reeled him back in and on the next climb, Bell attacked, taking Buys with him. Combrinck lost time on a technical section and hovered around a minute back as Bell and Buys took turns to push the lead pace.

For most of the last half of the race, Bell let Buys lead, which allowed Combrinck to close them down and catch them as they hit the final kilometre. In the sprint for the line, Bell was the fastest, with Buys just holding off a charging Combrinck to secure the runner-up place.

“We set out to work as a team. Gawie made the pace hard from the start and then I managed to get a gap on Philip, who had to chase to catch me. Then I let Philip lead for the last part and waited for Gawie to get back so that we could have a numbers advantage and it worked out well in the end,” said Bell.

“I did a lot of work today. Well done to Gawie and Nico. They’ve been racing non-stop this year. It was still a hard race for everyone. I had to chase Nico and managed to get a gap on him on one of the technical climbs. I slowed down a bit in the last 10 kays to save something for the sprint. But that allowed Gawie to catch us and I just didn’t have enough left to challenge Nico all the way to the line in the sprint,” explained Buys.

“Philip was strong today. I left my skills at home on the technical section and had to chase for about the last 30 kays. The gap was about a minute and then I caught them right at the end but just couldn’t get the jump on them. I’m happy for Nico to win this race win and the Series title,” said Combrinck.

In the women’s race, a group of six formed early on but gradually trimmed down as the terrain, gradient and mud began to take their toll. Glover eventually found herself out front alone, eventually clocking a winning time of 3:03:52. Janine Muller was a distant second, with Mari du Toit rounding out the podium places.

“The route suited me. I went as hard as I could for as long as I could. The mud was thick on our tyres though. At about 16km a lot of people stopped to take the mud off. I bounced my bike a bit on the tar and that helped get the mud off. I haven’t raced mountain bikes much this year, but it was good to finish off the year on a high note,” smiled Glover, after her first ever Nissan Trailseeker Series race win.

Over 2400 riders participated across the four events on offer on the day. In the 38km half-marathon, Pieter du Toit secured the overall male title, while Danielle Strydom was the first female finisher.