Bell, Ralph get Nissan Trailseeker Series off to victorious start 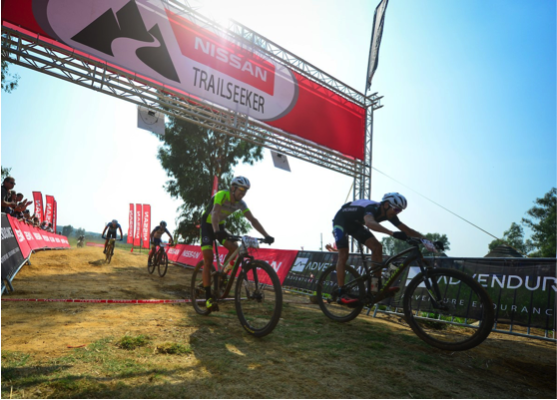 Nico Bell throws his bike forward to claim the win ahead of Philip Buys at Round 1 of the Nissan Trailseeker Series at Legends MX east of Pretoria on Saturday.
Photo Credit: www.zcmc.co.za

Nico Bell and Theresa Ralph got the 2017 Nissan TrailSeeker Mountain Bike Series off to a victorious start when they won the men and women’s titles respectively at Legends MX, east of Pretoria at the weekend.

Bell claimed the men’s title in a thrilling four-man sprint, while Ralph was able to secure a fairly comfortable win in the women’s race.

In the men’s race, the pace was fierce from the start on a 67km course that was considered relatively flat and fast. By 30km there was still a lead group of more than 20. But the distance began to take its toll at that high intensity and riders began to slip off the back in the second half.

Bell managed to get into the final corner first, ahead of Knox. The Team NAD Pro rider then kept his lead to the finish line with Buys coming past Knox to take second place. Knox rolled over the line in third with Du Toit taking fourth place. Bell’s winning time was 02 hours 25 minutes 21 seconds.

“It’s always hard from the start at these Nissan TrailSeeker races. Everyone is watching each other and it’s a high intensity pace virtually throughout. All our form is quite good ahead of the Epic, so it was quite a close battle right to the end,” said Bell.

“I had a good look at the finish section before the start today and new I had to get into the final corner first to be in with a shot at the win. It worked out well in the end,” smiled Bell.
“It was game on when Max and Nico caught us after the mud crash they had,” explained Buys. “Nico has a strong, long sprint and we knew he would drag it out from way back. It was very exciting. The whole Nissan series is awesome for the sport. The short races are spectator friendly and make for close racing. It’s great to have this many people here.”

“They made some nice improvements to the course this year with bits of new singletrack added on. It kept you on your toes,” said last year’s winner, Knox.

“I knew it would be a tactical race and just like last year, it was sprint finish between four guys. A sprint finish is always a bit of a gamble. Last year it paid off for me and I won, just pipping Nico. This year Nico won. Some you win, some you lose.”

In the women’s race Ralph (Galileo Risk) and Vanessa Bell were the early leaders. Bell then suffered a mechanical, which saw her adopt chase mode for the remainder of the race. Ralph kept her pace consistent and avoided any potential problems and held onto her lead to finish first in 2:42:39. Bell was second two minutes later with Adrienne Moolman a distant third.

“It was a very fast and flat route. In the beginning we were a group of four but on the grassy climb, where you needed a kidney belt because it was so bumpy, Vanessa and I got away from the others. We stayed together until she had a mechanical and I then just kept a safe, steady pace to the finish,” said Ralph.

“The Nissan TrailSeeker Series is great for families. Both my son and my daughter participated in shorter events here today. The facilities here are excellent and the organisation first class as always,” added Ralph.

“On a long bumpy singletrack section, Theresa and I got away. We just gunned it from there. Then I had a technical and Theresa moved ahead of me,” explained Bell.

“I got going again quite quickly and I was quite close to Theresa when we got to a singletrack descent. There were four men in front of me and I shouted ‘track!’ to try and get past. But guys don’t always like it when a lady asks them for track. They weren’t keen to move over and one of them fell in front of me, which upset my rhythm and any chance of getting closer to Theresa,” added Bell.

Round 2 of the Nissan TrailSeeker Gauteng Series takes place on 20 May 2017 at Buffelsdrift, Pretoria North. To enter, or for more information, visit www.trailseekerseries.co.za