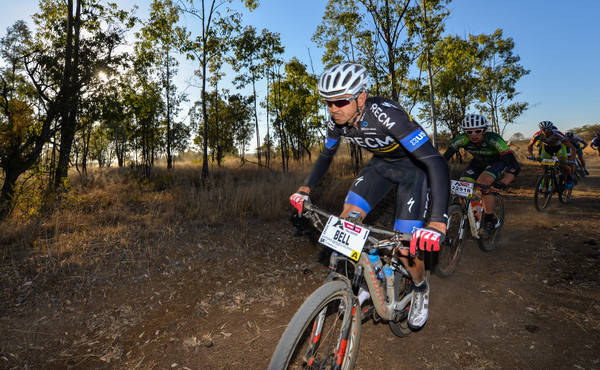 Mpumalanga’s Nico Bell and Western Cape’s Cherise Stander travelled from their home provinces to give Gauteng mountain bikers a lesson when they won the men and women’s titles respectively at Round 1 of the 2015 Gauteng Nissan TrailSeeker Series at Buffelsdrift near Pretoria on Saturday.

The first 20km of the course were largely on dual track and gravel roads, which saw a sizeable lead pack form, despite the fast pace. But once the field hit the Power Line Climb, the first significant ascent of the race, the splintering began. There was a total of just 800 metres of vertical ascent, but what the race lacked in climbing, it made up for in technical singletrack, which offers its own kind of challenge.

Roberts claimed the Dunlop Hotspot prize and was part of a lead pack for most of the race that included Bell, Swanepoel, Gawie Combrinck (EAI Cycling) and Guylin van den Berg.

“With so little climbing, the riders were able to stay close together. Near the end there was a concrete climb where I saw Melt get a bit of a gap. I managed to go over the top with him and got into the technical singletrack in front. I managed to hold a small lead over him to the finish,” said Bell.

“Nico was really good today. Tactically he rode well and was strong on the singletrack. This is a flattish course and you really have to work hard, pedalling the whole time,” said Swanepoel, who has just returned from a racing stint in the USA.

In the women’s race, a leading trio formed early on comprising Stander, Tamaryn Kietzmann and Adrienne Moolman. When they hit the first long climb though, Stander, the 2012 National Marathon Champion, rode clear, claiming the Dunlop Queen of the Mountain title. She raced on alone from there to the finish, steadily building her lead and clocking a winning time of 2:45:44.
Kietzmann crashed and sustained a knee injury, forcing her to withdraw from the race, leaving Moolman to claim the runner up place with Vanessa Bell (Bells Cycling) claiming third place.

Round 2 of the Nissan TrailSeeker Gauteng Series, the Lionman, takes place on 11 July at Mabalingwe, north of Pretoria. To enter, or for more information, visitwww.trailseekerseries.co.za
2015 Nissan TrailSeeker Series, Gauteng
Round 1, Buffelsdrift, Saturday 30 May 2015
Leading results