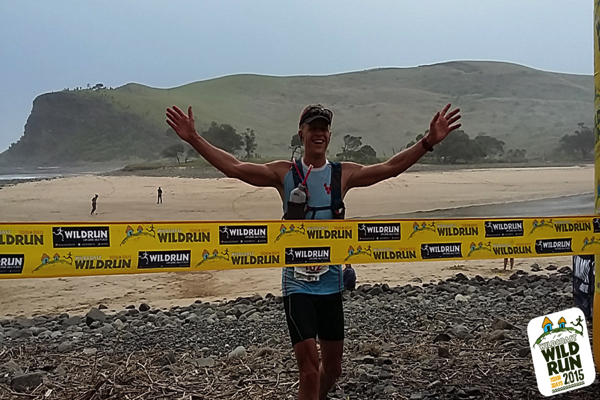 Bennie Roux takes the Wildcoast Wildrun® 2015 and smashes the record on day 3. Image courtesy of Wildrunner

The Wildcoast Wildrun® RACE ended with a bang on Tuesday as Bennie Roux smashed the day 3 record and the rest of the field was wrapped in a race against time as inclement weather moved in.

The Pretoria-based Roux had made it clear from the start that he was at the Wildrun® to break records and after two tough first days, the stars finally aligned on day 3 as the day dawned cool and cloudy with a slight tailwind. Gone was the headwind from day 2 and Roux wasn’t going to make the same navigational errors from day 1. He rushed through the 34km in a superb 3:01:25, not only smashing the record by approximately 13 minutes but also coming within 4 minutes and 36 seconds of the overall record despite his bad luck on the first two days. He walked away with the Wildcoast Wildrun® title with an overall time of 10:11:46 and has vowed to return in an attempt to break the 10 hour barrier.

Capetonian, Sylvie Scherzinger put in another sterling performance as she took top spot in all three days to claim her second Wildcoast Wildrun® title in an overall time of 12:42:56. This time not only gave her the overall ladies title but also put her second overall, an excellent achievement.

As the weather moved in over Hole-in-the-wall it was once again clear why this part of the world is called the Wild Coast with a thunder storm creating dramatic scenes. However, conditions held just long enough for the traditional finish line picnic to take place and top off another superb Wildrun® experience.