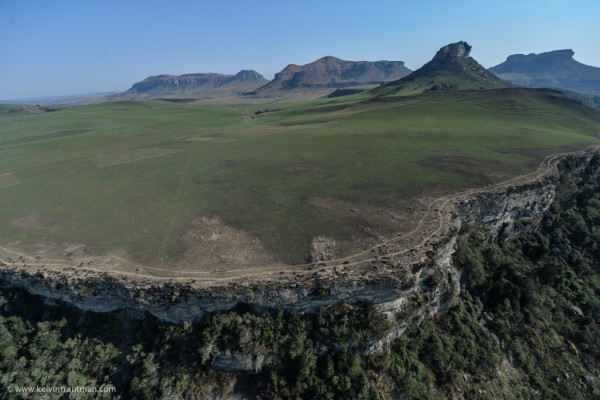 The Berg and Bush mountain bike event marks a “decade of dirt” this year with major celebrations and extensive route changes planned for the 10th edition of the Central Drakensberg stage race later this year.
Photos: Kelvin Trautman

The Berg and Bush mountain bike event marks a “decade of dirt” with major celebrations and extensive route changes planned for the 10th edition of the Central Drakensberg stage race later this year.

Race founder Gary Green said one of the new additions would be the “Race up Spioenkop” – a 1.5km hill climb on the Descent feature route – with prize money for the fastest rider to the summit.

“Because Spioenkop formed part of a famous battle in the Anglo-Boer War, there will be equal prize money for English and Afrikaans speakers,” he laughed.

“We are also making some radical changes to the route and planning some exciting competitions and other surprises.”

Green, who farms near Winterton in the shadow of Spioenkop, said the idea to start a race had first come to him while enjoying another KwaZulu-Natal event 11 years ago.

“I was riding with my brother Andrew when I realised that being an extensive cattle farmer and living in the foothills of the Drakensberg created the perfect environment for proper mountain biking.”

As it turned out, he was entirely correct. The original two-day race attracted just 56 participants but word quickly spread and the numbers swelled.

Today the event boasts more than 2 500 participants across three racing options, which include the three-day Descent and Great Trek.

“We would never have imagined that we would need three separate races to cater for the demand. We are totally overwhelmed and happy with what we’ve achieved,” said Green.

The two weekend events – the Descent and two-dayer – were fully subscribed by August last year, he said.

“Our mid-week race, the Great Trek, is growing every year. It’s a more relaxed and scenic option for less competitive teams and solo riders.”

Green said the major highlights over the past decade were finding routes down Spioenkop and off the Drakensberg Mountains to create a tradition of true mountain biking.

When three of the reserve’s rhino were poached a couple of years ago, the race organisers stepped in to prevent it from happening again.

“We were devastated as a community. Together with our sponsors we repaired and replaced sections of fencing around the reserve to help save the rhino and fortunately haven’t had any problems since.”

“This year, we are also hosting our first trail run on the Berg and Bush route to help raise funds for the conservation of the oxpecker birds.”

In addition, he said the event employed people from the local community throughout the year to prepare, maintain and develop new routes.

“Many schools, churches and community organisations also benefit financially from running the waterpoints.”

He said some of the first participants in 2006 and sponsors over the years had been invited to take part in the anniversary celebrations.

The event starts with the Descent on October 9, followed by the Great Trek on October 13 and wraps up with the Two-Day from October 17.

Green appealed to riders who had entered all 10 Berg and Bush events to contact them at info@bergandbush.co.za.