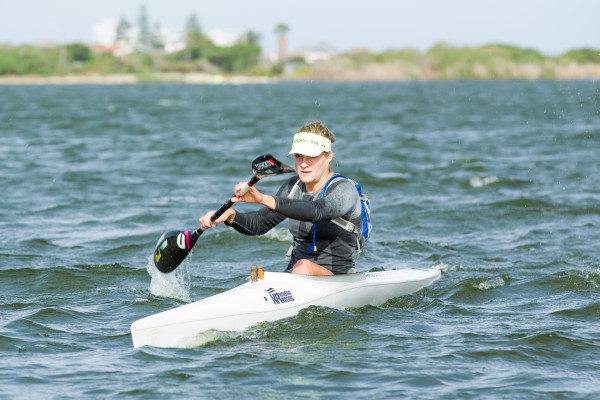 Paarl – The women’s field for the 2016 Berg River Canoe Marathon from Paarl to Velddrif from 13-16 July has received a major boost with the confirmation that both Nicole Russell and Kyeta Purchase will take on the gruelling 240km challenge for the first time this year.

The Durban-based pair have been in sublime form in the past twelve months in across a wide variety of paddling disciplines and are eager to use the Berg Marathon to aid in their build ups to this year’s ICF Canoe Marathon World Championships in Brandenburg, Germany in September.

“I’ve never done the Berg before but I’m very excited to do my first this year!” confirms national marathon champion Russell. “Lee (McGregor) has really been encouraging me to do the Berg ahead of Marathon World Champs later this year so hopefully all goes well down in the Cape.”

“I’m very excited and am looking forward to the challenge of the Berg but I’m also pretty nervous because I have no idea what to expect as far as the rapids and tree blocks go,” admits Purchase. “Lee suggested I do the Berg and then I spoke to Hank (McGregor) and he also recommended it if I wanted to do well in Germany.”

Despite their lack of Berg River experience, the pair’s pedigree will undoubtedly see them join local lass, Bianca Beavitt (Pink Lady/Century City) in the tussle for the women’s podium positions.

28 year-old Russell clinched the senior women’s K1 national crown at the recent 2016 Prescient South Africa Marathon Championships at Zandvlei in the Western Cape before going on to overcome hot and flat conditions at the FNB Durban Downwind to clinch the World Surfski Series title event’s crown.

“It’s a long way but I’m just going to look to pace myself and enjoy it as much as I can,” says Russell.

“I’d love to podium but, having never done it before I can’t quite be sure of what to expect so we’ll just take everything as it comes,” added the Mocké Paddling athlete.

For Purchase, a fourth place effort at last year’s Marathon Worlds went a long way in her being named the KZN Junior Sportswoman of the Year for 2015 before bagging yet another South African Schools Surfski crown in March.

With a formidable surfski and flat water record to her name already, the young Euro Steel/Mocké Paddling ace is still a relative river newcomer, despite her victory in the Junior Girls race at the 2016 FNB Dusi and third overall.

“Initially I was just aiming to finish Berg this year but Dusi has given me some confidence on the river – even though I sat behind a really good partner then – and so I’ll try push as best I can and hopefully can get onto the podium.

“SA Marathon Champs down in the Cape also gave me a good idea of the type of weather we could have to deal with at Berg but fortunately I also prefer the cold so I don’t think that will bother me too much.”

Under the guidance of Lee McGregor – who sensationally achieved back-to-back eighth placed Berg efforts in 2013 and 2014 despite being a Grand Master competitor – Russell and Purchase are confident they are in good hands as they prepare for their maiden Berg voyages.

“We’ve put in quite a bit of mileage during our MACSquad training sessions while Lee – who has done a couple of Bergs, and rather well too – has also guided us along the way,” explains Russell. “Once I get back from this weekend’s Mauritius Ocean Classic, I spend one day in Durban and then it’s down to the Cape for Berg so it’s a busy time for me but a very exciting one too!”

“Last weekend I did 34km on Midmar Dam on both Saturday and Sunday and then we’ve been doing two hour training session all of this week so we’ve been putting in the miles,” adds Purchase.