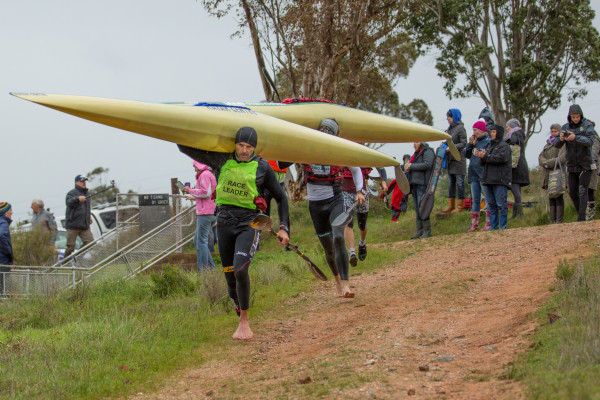 With a third stage win under the belt, nine time champion Hank McGregor (front) maintained his lead over the rest of the field as he won Friday’s third stage which sees the Jeep Team/Kayak Centre ace hold a handy advantage heading into Saturday’s final leg of the 2015 Berg River Canoe Marathon on Friday. John Hishin/
Gameplan Media

Zoutkloof – Overnight race leaders Hank McGregor and Bianca Beavitt head into Saturday’s fourth and final stage of the 2015 Berg River Canoe Marathon with their healthy leads still intact having overcome not only their fellow competitors but the treacherous conditions from Bridgetown to Zoutkloof on Friday.

While still trying to put on their best game face, it didn’t take long for even the race’s top elite paddlers to turn all their attention towards surviving the day’s challenge as freezing cold temperatures, scattered showers of rain and gale force winds challenged their mental toughness as much as the epic third stage tested their physical endurance.

Despite his lead, Jeep Team/Kayak Centre’s McGregor wasn’t about to surrender any of his hard earned advantage, edging out Andy Birkett (Euro Steel) in the day’s end sprint while the international duo of Kiko Vega of Spain and Czech Republic’s Jakub Adam followed a few seconds later.

“It was pretty long, cold day,” confirmed McGregor shortly after getting off the water.

“Following the portage after the Moravia Weir I decided to push the pace a little bit and only three guys came back after Keith (Moule) and Joep (van Bakel) fell off the back of the bunch.

“From there the four of us just looked to work together with each of us taking up the pull for a kilometer at a time as we looked to just tick over the kilometers until we got to the end,” he added.

While chuffed to get off the water at the end of a long day’s paddle, McGregor took the time to spare a thought for those that were still to battle the elements for the rest of the afternoon.

“When we passed some of the back markers early on I just felt sorry for them because I think there are going to be guys with hyperthermia this afternoon!” said a concerned McGregor.

“We took nearly six hours so I’d hate to know how long the guys at the back are going to be out there for!

“One thing is for sure though – when you finish this year’s Berg you can pat yourself on the back because this is one of the toughest Bergs ever!”

Starting the day two and a half minutes adrift of McGregor and with conditions limiting the likelihood of a breakaway, Birkett had to settle for the day’s consolation prize – the stage’s bridge prize for being the first to Moravia.

“At some stages we had a bit of a tail wind but for a lot of the way we had quite a strong headwind; that was definitely one of the hardest days of paddling I’ve ever had!” explained the Euro Steel ace.

“Once we were down to a group of four then no one was really trying to attack each other; after the portages we’d wait for each other and on the water we’d share the load amongst us as we looked to just survive the day!”

With Dusi Canoe Marathon, N3TC Drak Challenge and Hansa Fish River Canoe Marathon finishes already to his name, Jakub Adam is no stranger to the South African river scene however Friday’s test was certainly something new for the seasoned Czech Republic competitor.

“It was a really tough day, the wind was really tough and sometimes it felt a bit like we were paddling on the ocean!” said Adam.

Dutch competitor Joep van Bakel has been one of the race’s more colourful characters throughout however even the Kanocentrum Arjan Bloem flyer’s usual high spirits took a dent from Friday’s challenge as he followed Keith Moule of Great Britain home in sixth place on the day, securing him fifth place overall.

“It was terrible; it was just about forty kilometers too long!” laughed Van Bakel afterwards. “That was the longest and craziest days paddling I’ve ever done!”

“Luckily when I dropped off the first group I was with Keith (Moule) so I wasn’t alone.

“We worked together quite well until the last five kilometers when we saw three South African guys chasing us which then meant we couldn’t ease off towards the end unfortunately.”

With a lead of nearly an hour going into Friday’s longest leg, Beavitt had the luxury of not having to focus on her nearest rivals and could simply concentrate her efforts on getting to the day’s finish line.

“The conditions were probably even worse than what everyone is saying they are,” laughed the tired Century City/Pink Lady paddler. “We had a short section of downwind today but other than that it was just a really hard slog.”

Saturday’s fourth and final stage from Zoutkloof to Velddrif will again be a testing day’s paddling with many curious to see if the rest of the field has any answers to McGregor’s commanding effort thus far as he goes in search of a record tenth Berg River Canoe Marathon title. More information can be found atwww.berg.org.za