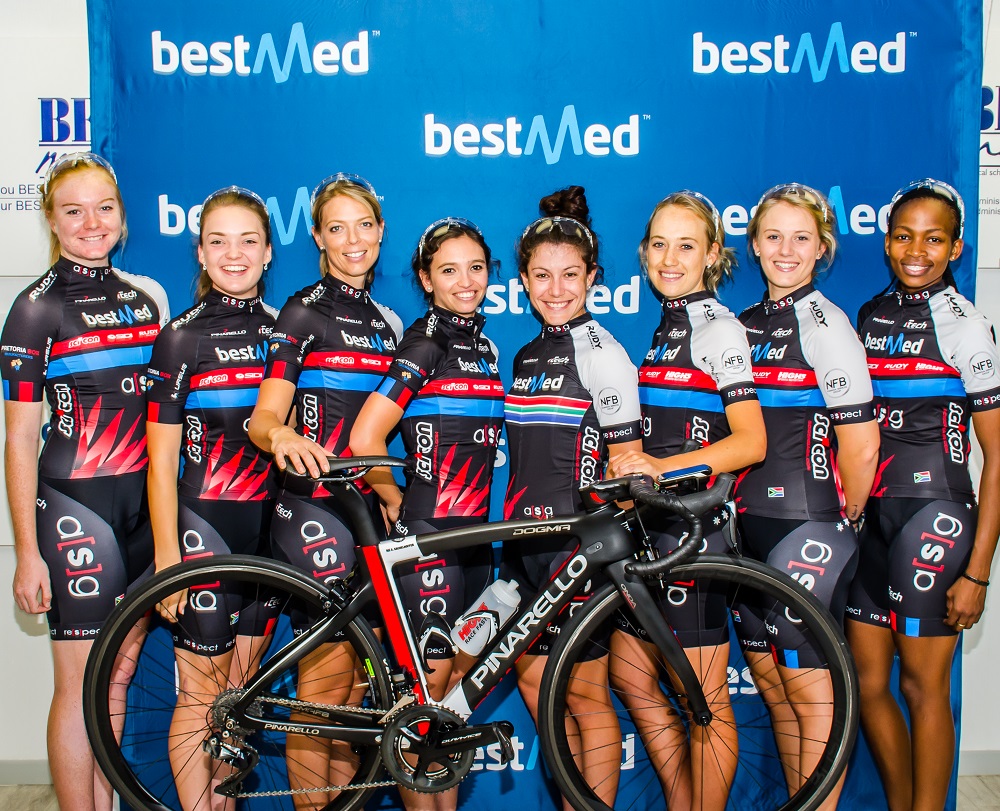 Having signed up a new-look outfit of elite riders, Team Bestmed-ASG will be focused on making a major impact on the South African cycling scene this year.

Grabbing their immediate attention will be the SA National Road Championships in Wellington this week where team leader and Olympian An-Li Kachelhoffer will be defending her road race title on Saturday.

Team manager Owen Botha said they would also be looking further ahead to the Bestmed Tour of Good Hope from March 6 to 10, as well as the Cape Town Cycle Tour on March 12.

“We know it is always a tough task to retain the national title, but we will be targeting that for An-Li this weekend. From then on we will use a number of races to sharpen us for our objectives in March.”

Botha said the team’s focus this year would be to create a strong, cohesive unit under Belgian manager Steven Sergeant which could make their presence felt.

“All the riders are elites and the aim is to support An-Li, who has all the credentials to do well.

“But she also wants to pass on her knowledge to the other riders to give them the benefit of her experience.”

Botha said the team were planning training camps in the Western Cape under the guidance of Sergeant to build up a spirit of cooperation in their ranks.

Besides signing Kachelhoffer, he said they had also brought in Zanele Tshoko and Skye Davidson.
“We have been keen to get Zanele to join us but she was committed elsewhere in the past two years,” he said.

“In fact, we tried to get Lise Olivier to sign with Zanele because they have done a lot of work together in the past, but Lise is taking a different path, going into the corporate world at this stage.”

Botha said he had seen Davidson in action and noticed her climbing skills even though she was relatively tall.

“We needed someone like that to assist An-Li as a powerful domestique to provide some protection. Skye has a very good CV and plenty of ‘vooma’.”

He said they believed Davidson had the right qualities and the aim would be to teach her how to handle the longer distances now she is an elite.

Speaking from the official launch of the team in Pretoria, Botha added that they had also signed Bernette Beyers, who was currently in Switzerland on a training programme to improve her track cycling skills. She is due to return in April.

The team made their debut at the Bestmed Berge en Dale Championship on Saturday, delivering Kachelhoffer to second place on the podium in a sprint finish.

As the senior rider in the team, Kachelhoffer said she saw her role more in a mentoring capacity than anything else.

“At the age of 29 I feel this is a chance for me to give back to some younger riders because I know your career can’t last forever,” she said.

“We are a diverse team and it will be nice for the younger riders to learn about a team environment and how a professional women’s team is run.”

She said she wanted to impart her experience of riding in Europe on the younger riders so they knew what to expect when competing overseas.

Kachelhoffer said they had a good first race at the Berge en Dale in Muldersdrift on the West Rand, but added it was more than just about the final result.

“For example, Chante (Van der Merwe) told me it was the first time she had been in a sprint finish in a women’s race, so it’s those experiences to which we want to expose them.

“The team dynamic is more about the girls coming together to set personal goals and aiming to grow as cyclists.”