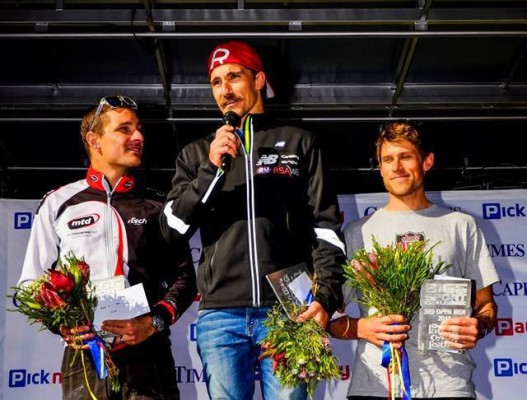 Knysna, Western Cape, 2015-07-02 ~ Paul Ingpen, editor of Ironman magazine and 20 odd times Knysna Festival Big 3’er & 5’er (going back long before it was formalised), makes some predictions for this year’s BIG5 Sport Challenge, and BIG5 Lite, which will be a sporting highlight at this year’s Pick n Pay Knysna Oyster Festival.

Not to be outdone by Carla van Huysteen, the queen of Knysna, and much to the chagrin of his rivals, Stuart Marais was a last minute entry to defend his Big5 crown for a third time straight.

In the absence of the high profile professional triathletes from recent years now racing abroad, the other Pro athlete Theo Blignaut, who has had an incredible year so far, is the likely threat should the tough and likeable farmer from George fail to dominate for 10 days straight.

Stuart is now racing Ironman 70.3 globally so we are lucky to have him here mid-season and only weeks before he lines up as race favourite in Durban. His pure run speed mixed with mental and physical toughness make him close to unplayable in the cold, muddy & hilly forest battlegrounds.

Theo may closely resemble an innocent version of Matt Mcconaughey, but the young ex-sprint triathlete uber swimmer has taken to the dirt in a huge way – most notably at the ABSA Cape Epic with Cherise Taylor. He then went on to win longer format triathlons including a few Xterra’s and the Warmwater Weekend. He won’t lie down easily.

That said, every year we see surprises as athletes have bad days or mechanicals as the week-long event unfolds so this is no two-horse show; which it may have been in the Dan Hugo vs. Stuart Marais era.

There are a bunch of pedigreed, fast, hungry hyenas that will be snapping at his heels if he shows any signs of weakness. In no particular order the following young amateurs should make up the top 5 and will all be jostling for a space on the final podium on the Saturday night after the Forest Marathon:

JD Neil is an experienced Ironman with real speed, Murray Haw is a tough young farmer who won’t have bad days and Dean Hopf is a fast rising star who will have done his homework and give top spot a real go.

Mike Cannon is possibly the strongest runner (2:44 marathon) so if the cold water doesn’t get to him and he can last a week he must be a great bet for Top 3. Aidan Nugent is a super talented LLB student from KZN who has represented South Africa at Junior ITU Cup races and made Top 10 in stacked field at Xterra Champs, another big threat if he lasts all week.

Carla travelled with Theo to a few big international races this year and won them plus a few Warrior events so are also on great form. The daughter of springbok flyer Gerrie Germishuys should still be the yellow jersey holder at prize giving on Sat 11th July.

Again the vultures will be circling, hoping that the long reigning queen will falter. Most likely a new name or 2 will emerge from the misty lagoon but of those we are familiar with the most notable challenger is Andrea Steyn, herself a multiple winner with a long history as a dominant pro triathlete. Andrea just beat Carla into second at the Dual X – that after she came back from a terrible bike accident a year ago with an impressive win at the 5150 triathlon. Andrea should be poised for a great battle with Carla, especially on the final 21km run decider.

Behind them expect some louder hissing from:

2) Brand new mom, Lauren Cannon (who met husband Mike on the top step at Ironman 70.3) and ran a fast Knysna Forest half marathon with a big, pregnant tummy last year.

4) Tamika Haw who likes rest of her family has scary genes and never say die attitude and partnered her sister to second at Dusi.

A mix of older guys coming back to the sport and young guns shy of the longer week or keen to party means this field is wide open.

Poster girl, Su Mari Jooste, a 2 time Warmwater Weekend Triathlon winner should own this unless one of the many lesser-known entrants sneaks up on her.

For more information on the BIG5 Sport Challenge: