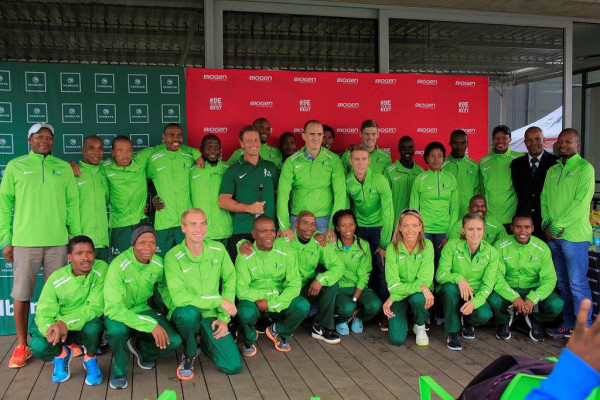 With 13 branches in 12 cities, the Nedbank Running Club brings running enthusiasts together at both a social and competitive level. The club is also very proactive in identifying and nurturing talented runners and assisting them with opportunities and support to allow them to achieve their potential.

“The important thing for Biogen is that runners are becoming more and more aware of the importance of supplementation before, during and after training and races. Biogen’s range of high-quality endurance supplements is ideally suited to runners of all levels looking to perform optimally.

“For us, the association with the Nedbank Running Club is also an important investment in the sport. Having only been established in 2008, the club is structured and managed on very modern principles, which still respect the great traditions of road running and but which are firmly focussed on making the sport as enjoyable as possible for all,” added Fairweather.

While it has a national club structure, the Nedbank Running Club has branches in Bloemfontein, Cape Town, Durban, East London, George, Johannesburg, Klerksdorp, Nelspruit, Port Elizabeth, Pretoria, Soweto and Vanderbijlpark. This ensures that runners from around the country are able to enjoy the benefits of the club on a weekly basis.

Nick Bester, a former Comrades Marathon winner and multiple gold medallist, is the club’s national manager and the various branches of the club are also managed by former top athletes, who are able to offer the best possible mentorship and support to members.

“We have built the Nedbank Running Club on values of sportsmanship and having Biogen as a partner helps us maintain these values,” said Bester.

“Biogen is one of the few sports supplement brands that has selected product lines that are tested and approved by Informed Sport and Informed Choice. They also offer batch testing on other products, which is basically an investment in making their products as safe as possible for the athletes.

“With so many of our top Nedbank Running Club athletes being in podium contention at most events, and with our club working closely with the South African Institute for Drug Free Sport to create clean sport, it’s extremely important to have this peace of mind as well as access to the high quality energy and recovery supplements from the Biogen range,” added Bester.

Records smashed at the 25th running of the K-Way Skyrun