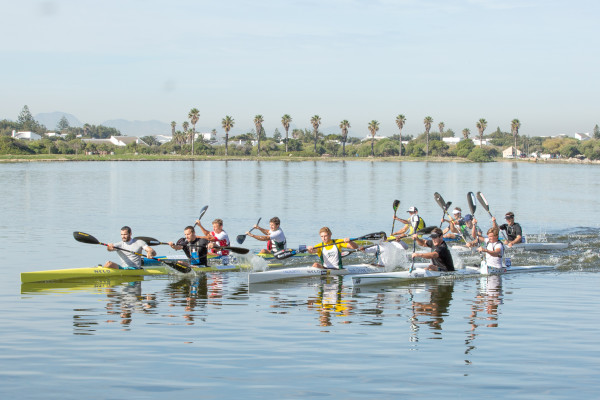 Cape Town – Andy Birkett and Louis Hattingh won a thrilling senior men’s K2 race to bring down the curtain at the Prescient SA Marathon Championships at Zandvlei near Muizenberg on Sunday, while Olympic medallist Bridgitte Hartley and teammate Abby Solms took the women’s title in an equally thrilling race.

After a dramatic penultimate portage, McGregor and Ntondini were dropped off the front bunch with Van Gysen and Adam, leaving two K2 crews to slug it out over the last two kilometres.

Birkett, a former Under 23 world champ and Hattingh, who won the junior world title in 2014, timed their interval to the line perfectly to hold off Van Der Walt and McLaren by less than a boat length.

“It feels fantastic to win it, especially after such as close race,” said Birkett. “I can’t wait to race with Louis (Hattingh) at the world champs in Germany in September.”

“He is very calm in the race and aggressive when he has to be,” he added. “He is racing with maturity and experience beyond his years.”

There was a great deal riding in the race after the confirmation that Mocké would not be racing, and had put in a written motivation for exemption to the national selectors to allow the EuroSteel pairing of himself and McGregor, winners of gold and silver at the last two world championships, to be considered for the national team.

The K2 silver and K1 bronze signalled the return to top form on Brandon van der Walt, following on from his successes as a junior and Under 23 marathoner.

The women’s title was decided in almost carbon-copy like fashion as Hartley and Solms turned into the finish straight with double Under 23 bronze medallist Jenna Ward and junior prodigy Kyeta Purchase, with Hartley’s awesome sprint power, being fine-tuned for the Rio Olympics, prevailing in the closing fifty metres.

In the junior races, former world champ jean van der Westhuyzen teamed up with Cape star Mark Keeling to post an emphatic gold-medal winning performance over the game paring of Ulvard Hart and Zach Preyser, while the well drilled crew of Sabina Lawrie and Christie Mackenzie were never challenged in romping to the junior laurels.