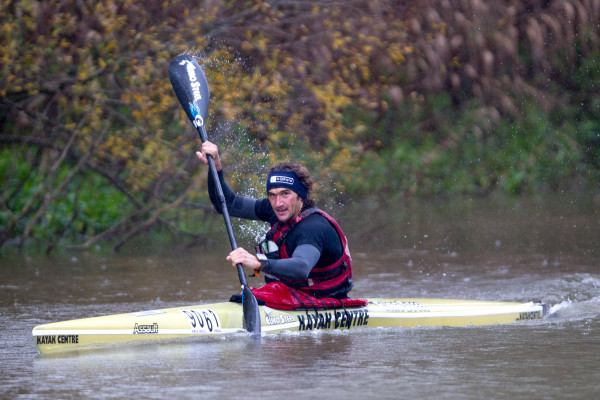 Andy Birkett has confirmed that he will be back to defend his title in the Berg River Canoe Marathon from 15 to 19 July. “Flip it was tough last year!” he recalls. “It was cold, putting on beanies and two or three hallies and long pants when you are busy paddling. But that is all part of it.

Cape Town –  Andy Birkett has confirmed that he will be on the start line for the defence of the Berg River Canoe Marathon title that he won last year when then race gets under way in Paarl on Wednesday 15 July.

The 24 year old Pietermaritzburg ace won the SA K1 flatwater marathon title on the weekend, deposing the reigning World Champion Hank McGregor to claim the title for the first time.

Birkett entered the Berg last year as part of his training for the Marathon World Championships in Oklahoma City, and felt that the 220km four day race had contributed well to his conditioning for the world title decider.

Having made the South African K1 and the K2 team for the 2015 Marathon World Champs in Gyor in Hungary Birkett was quick to finalise his plans for the build-up to the event that included returning to the Western Cape for the defence of his Berg title.

“I am keen to get down to do the Berg again this year,” said the Euro Steel star. “It is an awesome race and it is a very important part of my build-up (to the world champs).”

Birkett plans to fly into the Cape the day before the race, in time to do the time trial, and won’t be able to do any training trips on the river due to his marathon training plans in Pietermaritzburg.

He used this tactic to good effect last year where he discreetly tucked in behind the experienced local elite racers, particularly on the earlier sections of the course where local knowledge through the tree blocks and small channels is important.

“If I went down for a month before then I could lead the way and show the guys where to go,” said Birkett.

“Luckily there are some nice guys down there with good manners on the river, who don’t really want to shaft me too much, so I’ll have to hope that they show me where to go again.”

“It’s a long way and for me it’s a bit of a logistical nightmare,” he added. “I think I will just sleep in the barn each night and keep it as simple as possible.”

Birkett won the Berg last year in his first serious attempt at the title. He makes no bones about the fact that the gruelling 220km race takes its toll, even on well-conditioned paddlers.

“Flip it was tough last year!” he recalls. “It was cold, putting on beanies and two or three hallies and long pants when you are busy paddling. But that is all part of it.

“There is a cool ‘gees’ down there and I really enjoy it,” he concluded.