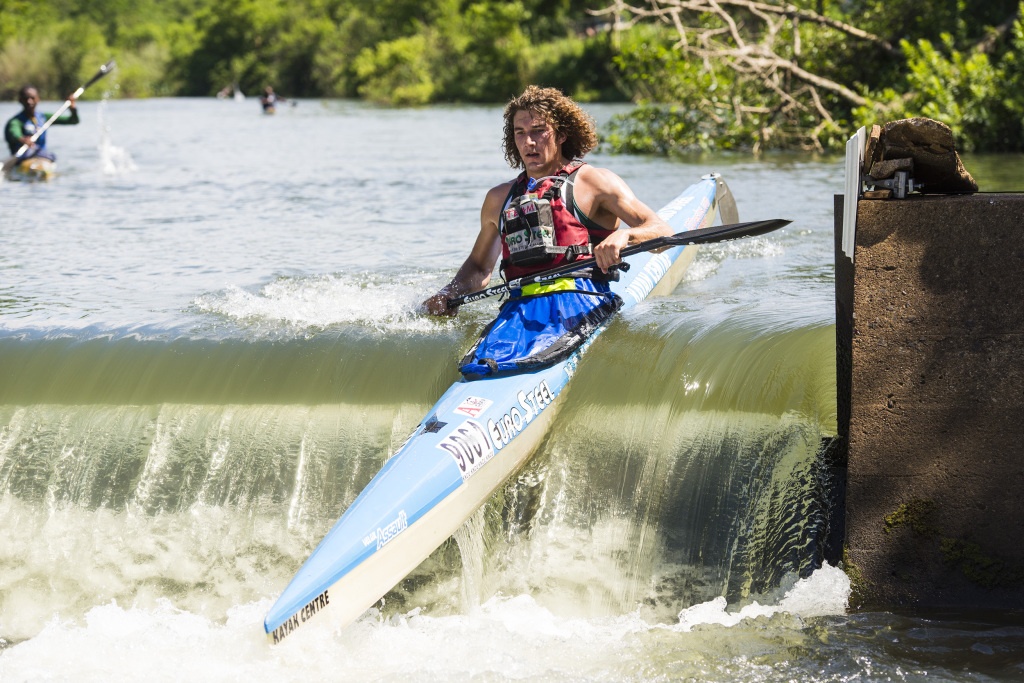 Pietermaritzburg – Andy Birkett ended a three year spell as the bridesmaid by finally bagging the Ozzie Gladwin presented by Parklane SuperSpar title, outduelling his Dusi Canoe Marathon winning partner Sbonelo Khwela, while Laura O’Donoghue raced away from a strong field to claim a dominant victory in the women’s race on Sunday.

The men’s race was a fascinating showdown between Birkett (Eurosteel), Khwela (Eurosteel/Red Bull) and another former Dusi winner, Thulani Mbanjwa (BuildIt). They were among a leading group of seven paddlers on the Albert Falls Dam before the event’s sole portage of about three kilometres, which Khwela used to take the lead over Mbanjwa.

“At the start I aimed to stay with the guys on the front bunch on the dam and I was dominating,” said Khwela. “Then, on the run, I pushed myself hard to try to be first at the end of the portage. I wanted to get a little bit of a gap to recover and to be ready for the flat water and for the river skills.”

Khwela and Mbanjwa then worked together to try and drop Birkett, knowing how strong he is on the water. At one stage the four-time Dusi champ was 50 seconds off the pace, but he managed to work his way back to the front-runners after seven kilometers of river racing.

“In my mind, I was hoping to stay with them for the whole run, but in reality there is no hope in actually achieving that. Obviously there was a chance I was going to be behind them getting onto the water and trying to catch them,” said Birkett

“When I caught them I was pretty stuffed, so I slowed the pace down just to recuperate and recharge,” said Birkett..

Once together, the trio engaged in a game of cat and mouse before Birkett managed to open a slight gap on Khwela and Mbanjwa, both of whom fluffed their lines in the shallow rapids near the finish, to take the win by just over seven seconds. Mbanjwa claimed third, 36 seconds behind the winner.

“It’s great to win, especially being a Natal Canoe Club (NCC) member, to win your home race, so I’m stoked to do it for NCC and to score my first Ozzie Gladwin win,” Birkett said. Khwela was also satisfied with his effort, declaring: “I’m happy about my result.”

While the river season is now under way, Birkett warned that one should not read much into the Ozzie Gladwin result ahead of the Dusi in February.

“This is a very different race to the Dusi,” he explained, “It is not exactly a Dusi-style race because the portage here, although we find it hard at this stage of the season, is quite an easy portage compared to some of the portages on Dusi.

“There is still a lot of work to do to prepare for those portages.”

Laura O’Donoghue was a convincing winner of the women’s race, more than five minutes up on second placed Jenna Ward.

“I’m very chuffed. It’s a confidence booster for the start of the season,” O’Donoghue said.

“There were three of us in a group and on the run I managed to break away and put in in front. I was waiting for the girls to catch me the whole way, so I had to work really hard and I was really tired at the end.”

Ward said that so early in the season the portage had been somewhat intimidating, but once she had that out of the way she was confident that her river skills would enable her to maintain her position.

The portage aside, she said it was great to be back in the river season. “I love the rivers. It is definitely my favourite, along with surfski. It is always nice to do something different and not having to worry about being in a dam and going straight and flat, and round and round. I love the rapids. The river season is definitely a fun time of the year.”

Epworth Under 16 ace Cana Peek grabbed the last spot on the women’s podium, while Abby Adie had a rare bad day, finishing way back in fifth overall.

“I just couldn’t get going. I felt so flat today, and once the girls got away from me at the portage I had to content myself with just finishing the race as best I could,” said Adie.

The event kicked off with a record entry for the Guppies’ race, with the enthusiastic children being well-supported by a big crowd packed with moms and dads.

Wayne Hodson, of Parklane SuperSpar, was thrilled with the children’s turnout. “It’s fantastic. It’s the biggest turnout ever,” he said.

“It is great to see the youngsters coming through, specifically the guys from the local communities. From a Parklane and Spar point of view, we’re very much behind the support of these youngsters and would really like to see them progress through the ranks.”

More info can be found at www.ozziegladwin.co.za