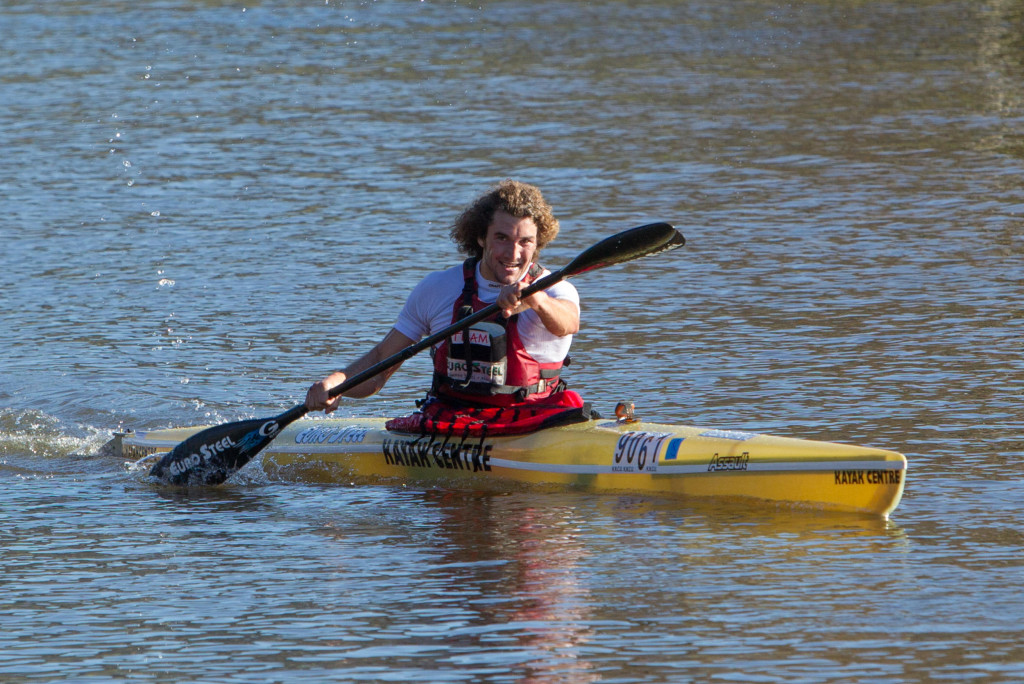 Paarl – Tuesday’s time trial gave participants and spectators alike their first glimpse of the form and focus of those likely to battle it out at the front of the men’s clash of the 53rd edition of Berg river Canoe Marathon when the pre-race time trial from Berg River Resort to Paarl Canoe Club took place.

KwaZulu-Natal’s Andy Birkett showed little evidence of his lack of knowledge of the local conditions and channels as the EuroSteel athlete and triple Dusi Canoe Marathon champion posted the fastest time of the day.

Despite coming in with a ‘good base training’ approach rather than looking to necessarily win the title, Birkett’s pedigree and his time trial success makes him one of a handful of pre-race favourites.

“It’s definitely nice to come down here to the Cape and start on a positive note, however the time trial doesn’t really count for all that much in the greater scheme of things and there is a long, long way to go over the next four days,” said Birkett.

“Just like the Dusi, if you wish to be competitive here at the Berg River Canoe Marathon then you need to know where you’re going and what lines to take – which I don’t – so I’ll try look to stay out of trouble as much as I can over the next couple of days and follow some of the local guys down the river.

“I’ve got Marathon World Champs coming up so I’m here hoping to just get some good mileage under my belt ahead of that but it’s obviously still nice to start things well here at the time trial and we’ll just see how things go over the next few days,” he added.

Men’s defending champion Lance King (Duxbury Netgear) was fourth quickest on the day but will rest easy overnight as he enjoys the luxury of a boat length’s advantage over his fellow paddlers at Wednesday’s stage one start courtesy of his 2013 success.

King has worked hard in the build up to this year’s Berg and is eager to make it title number two in 2014 however he will face some stiff opposition this time around from over a dozen elite stars.

“I’ve been building up for this race since January, I’ve really been focused this year and have worked really hard and, even though I have been sick three times in the past few weeks, I’m definitely hoping to defend my title!” said King.

“It will be a really tough race this year! Not only do you have the usual top river paddlers from the Cape but also guys like Andy (Birkett) from KZN, Jasper (Mocké) from surfski and Simon (van Gysen) – a former top sprinter who will smash everyone if it goes down to an end sprint – all adding to the mix,” he added.

While the men did battle in the time trial, top women’s contenders Abby and Alex Adie, Lauren Felgate and Hayley Arthur watched on from the river banks, keeping a close eye on the much talked about water level in particular while 2013 women’s runner-up Kirsten Penderis will be hoping to overcome the stiff challenge her fellow women’s title hopefuls pose.

Stage one from Paarl to Zonquasdrif on Wednesday 16 July starts at 09h30 at Paarl Canoe Club. More information can be found at www.berg.org.za