Blood, sweat and tears on a tough Stage 2 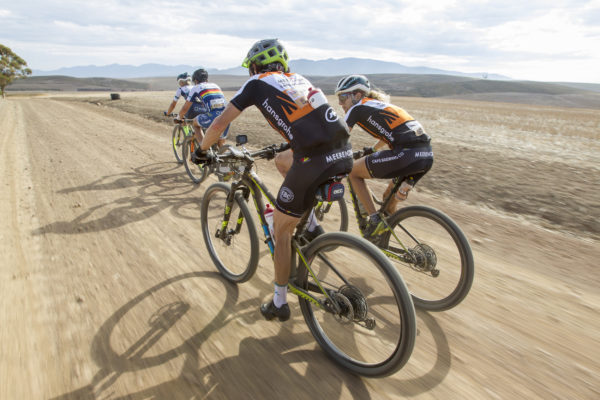 Esther Suss and Jennie Stenerhag of team Meerendal CBC keep a close eye on their competitors as Sabine Spitz and Robyn de Groot of team Ascendis Health lead the ladies race during stage 2 of the 2017 Absa Cape Epic Mountain Bike stage race from Hermanus High School in Hermanus to Elandskloof in Greyton, South Africa on the 21st March 2017
Photo by Greg Beadle/Cape Epic/SPORTZPICS
PLEASE ENSURE THE APPROPRIATE CREDIT IS GIVEN TO THE PHOTOGRAPHER AND SPORTZPICS ALONG WITH THE ABSA CAPE EPIC
ace2016

It was literally blood, sweat and tears in the battle for the Hansgrohe Women’s category at the Absa Cape Epic on Monday’s Stage 1.

At the end of the stage that started and finished in Hermanus, Jennie Stenerhag and Esther Suss of the Meerendal CBC team had sweated their way to a healthy overall lead in the category and now have nearly a nine-minute advantage over Sabine Spitz and Robyn de Groot (Ascendis Health).

The Ascendis Health duo, who started the stage with a 39-second lead after winning the Prologue on Sunday, had a tough day with a mechanical giving their rivals an early advantage, and then just as they starting clawing their way back, Spitz fell down a crevice and cut her head badly.

The German former Olympic gold medallist arrived at the finish with blood on her face and went off to the medics for potential stitches to close the wound.

Mariske Strauss and Annie Last (Hansgrohe Cadence OMX Pro) finished third and are now 13 minutes off the lead, but the big tears were from Ariane Lüthi and Adelheid Morath (Spur), whose hopes of victory seem to have almost certainly disappeared.

The pre-race favourites are a massive 23-minutes behind Stenerhag and Suss and after two disappointing days in the saddle do not look to be able to mount any sort of a challenge against the top teams.

Jennie Stenerhag, who last year was forced to withdraw from the race with an elevated heart-rate, was cautiously optimistic.

“I was in the same position last year at this point so I am not going to be taking anything for granted,” said the Swede, who rode with De Groot in 2016. “I did not know how far ahead we were but we were in front so we could take it a bit more carefully and not take any risks.”

Suss was relieved to have survived a tough stage in intense heat that reached into the high 30s.

“It was really a tough day. Early on it was windy and it was hard to fight against the winds. In the beginning I was not so fine, I had a high heart-rate but after the Hansgrohe Women’s Hotspot my rate was much better and we were able to race.

“I think it was more a mental thing. I was worried after what happened to Jennie last year and I was a little bit scared about what could happen with my heart rate so high.

“Then my heart rate went down by ten beats and I could push hard,” said Suss.

“We are now in the lead but so much can happen through the whole race. We must look after ourselves and not worry about the other riders and how they are riding.

“Tomorrow we will do what we can do and must go fast as we can but not overturn (crash). We must not take too many risks on the downhills. You can lose more in the downhills if you crash or whatever than you can make up by going quickly.”

There was also drama in the Virgin Active Mixed category with Olympic gold medalist Jenny Rissveds collapsing at the finish. With partner Thomas Frischneckt (Scott Sram Nextlevel), she had fought back to beat South Africans Grant Usher and Amy Beth Mcdougall (joBerg2C-Valencia) by just seven seconds in a brutal duel in the heat.

Rissveds crossed the line and then collapsed and had to be taken to the medical tent by the race medics.