Bouman gains valuable points at Race 6 of Wall & Back 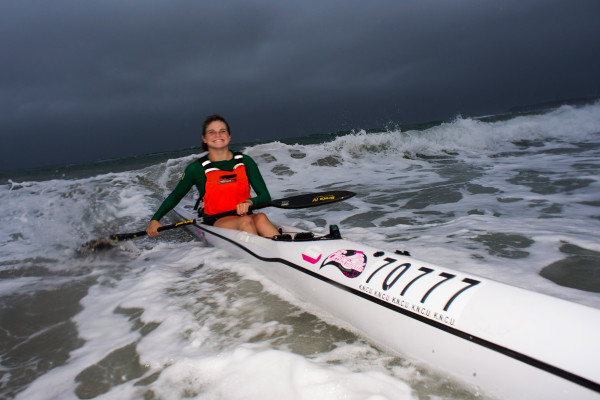 With some precious points on offer the young Kyeta Purchase managed to brave conditions on Friday evening and get herself right into the ladies mix with two races to go in the Illovo Suncoast Pirates Wall and Back Surfski Series. Anthony Grote/
Gameplan Media

Durban – As the 2015 Illovo Suncoast Pirates Wall and Back Surfski Series heads towards the business end Durban surfski stalwart Matt Bouman got himself some valuable points on Friday evening with two races left in the series.

A number of good results has put the Epic Kayak’s star in the mix but the win would have catapulted him into the contenders category on Friday as he managed to win the race by just over a minute ahead of Steve Woods.

Conditions were tricky with a side wind affecting the paddlers on their way back in and the small field were tested to their limits. Bouman was put under pressure towards the end of the race however the experienced paddler managed to pull through for a vital race win.

The only lady to brave the conditions was the young Kyeta Purchase who took the opportunity to gain some crucial points with two races to go and the young school girl has her sights firmly set on a first major surfski series win.

“I’ve got two wins in a row, although Friday’s race was not great for me but it has meant that I am in with a good chance of winning the series,” the Fenn Kayaks star mentioned. “If I manage to get a few good results in the run in to the finish of the series then I think that I will be in a good position to win the overall series!”

“It was quite tough out there to be honest.

“Going out was alright however once we turned the can I was hoping for some good downwind but we only got a sort of side wind which made paddling back quite difficult.

“I am really trying my hardest to be back for the race next Friday but I have a school commitment which might make it difficult but we will see what happens,” a hopeful Purchase added.

With just two races to go in the eight race series both the men’s and the women’s series are close with a number of paddlers putting their names in the basket.

The seventh race of the 2015 Illovo Suncoast Pirates Wall and Back Surfski Series takes place at 17h30 on Friday, 27 November at Suncoast Pirates, Battery Beach. More information can be found at www.wallandback.co.za