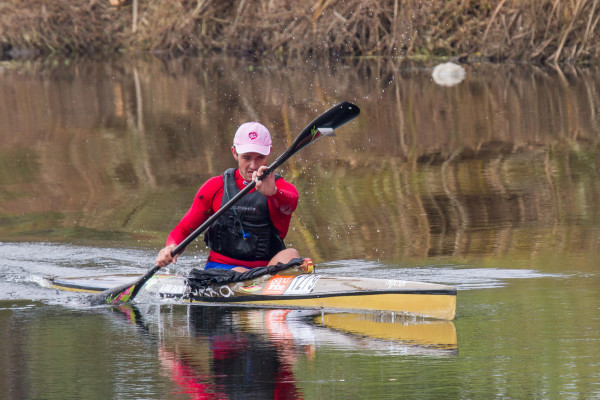 After winning the two-day Pink Lady race on the weekend Under 23 star Brandon van der Walt says he is uncertain about whether he will commit to racing the full Berg River Canoe Marathon from 15 to 18 July. John Hishin/Gameplan Media

Cape Town – Former junior World Marathon Champ Brandon van der Walt raced to victory in the Pink Lady two-day race on the Berg River on the weekend, but says he is undecided about committing to his debut on the tough four-day Berg River Canoe Marathon from 15 to 18 July.

The format of the Pink Lady race was chopped and changed to work around the very low river conditions and attracted a strong field, many of them preparing for the long and testing ultra marathon from Paarl to Velddrif in July.

Berg greenhorn Van der Walt used the solid form from his training for the recent SA Marathon Championships, coupled with his snappy portaging skills to snatch the win from Greg Louw and veteran Graeme Solomon.

“It was actually such good fun in the low river,” said van der Walt. “It felt a bit like a low Drak Challenge, looking for the water between the rocks and the trees.

“It all came down to being able to get away at the rocky shelves and the tree block portages.

“Day Two was short at 21km and I just decided to back myself,” he added. “It was a short enough day to be able to go flat-box from start to finish.”

The introduction to the unique style of racing on the Berg was somewhat unexpected for the Under 23 star, who moved to the Western Cape last year.

“My mom actually entered me for the race!” he explained. “I wasn’t that keen initially but I am glad I did because it has helped solve part of a budgeting problem.

“I have made the SA team to go to the World Champs in Hungary and I need to be able to pay for it, so the good prize money from this weekend was very welcome,” said van der Walt.

Despite the fact that van der Walt is training with a group of Western Cape elite paddlers preparing for the Berg, he is reluctant to commit to doing the four day classic from Paarl to the West Coast.

“Yes, I am kinda interested, but I am not sure,” he mused. “It is a long, long way, and while some guys like Andy Birkett swear by it as part of their training for the World Champs, I remember Jasper (Mocké) saying that it took him forever to recover from the Berg.

“I have never done a Berg before,” said van der Walt. “Like this weekend I was racing blind, following guys like Solly (Graeme Solomon).

“I am also committed to the surfski world champs in Tahiti three weeks after the marathon worlds, so I have to think it all through carefully.

“The river levels will definitely play a part in the decision. Guys have been chatting to me saying that I have a part that I can play in the race this year. I’m training with all the top guys in the Cape so at that level I’d be interested.”

“It will be great to be involved in the race if it includes Andy Birkett and Hank McGregor. I know Hank is keen to bag that tenth Berg title.

“I’m trying not to sound like a pansy but for now I am not sure if I will be doing the Berg,” he concluded.