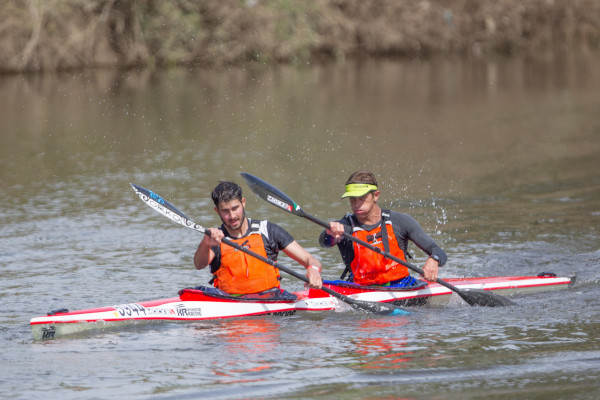 Robertson – Organisers of this weekend’s Breede River Canoe Marathon, which doubles as the 2015 South African K3 Championships, are confident that the race will take place over its traditional course from Robertson to Swellendam despite concerns of low water level due to the dry winter the Western Cape has experienced.

“The river is likely to be low and some of the larger obstacles will have to be portaged around however it looks likely that we will be able to stage the race over the normal course,” confirmed race organiser Russell Ikin.

“The catchment area for the river is up in Ceres, Tulbach and Wolseley and it usually takes five or so days to flow down past Worcester and then reach the section of river we race on.

“Despite water currently being pumped out of the river above the stretch we race on, the figures we’re receiving at the moment indicate the river has in fact actually gone up a touch since Saturday so we’re not quite sure where the water is coming from but things seem to be steady around the 10 cumecs mark.

“It has been tricky because we aren’t experiencing usual river flow patterns given the rainfall we’ve had in the Western Cape this winter however, things are still looking fairly positive at this stage for us to continue as normal this year!” he added confidently.

The Western Cape’s premier K2 paddling event is set to welcome a stellar field of elite combinations while some have opted for the three-seater option as they go in search of a rare national title in the K3 category, including three of the Western Cape’s top female paddlers.

2015 Berg River Canoe Marathon winner Bianca Beavitt (Century City/Pink Lady) will team up with the rest of the 2015 Berg podium finishers in Jane Swarbreck and Robyn Henderson in a K3 with the trio expected to be amongst the strongest three-paddler entries at the event.

While Beavitt and co. challenge for this year’s national spoils, much of the focus will be on racing snakes of the K2 clash with some of the top Western Cape crews fighting it out for the final silverware of the Cape canoeing season.

The evergreen Graeme Solomon (Bamboo Warehouse/Knysna Racing) and young Stuart Maclaren (Kayak Racing/Macsteel Maestros) clinched victory at the recent Western Province K2 Championships last weekend when they beat the reunited Damon Stamp and Mthobisi Cele by a minute and this weekend’s Breede gives Solomon and Maclaren another golden opportunity to add to their success as a combination.

Stamp and Cele, who won the Under 18 category at the 2014 Dusi Canoe Marathon and have reignited their partnership ahead of next month’s Hansa Fish River Canoe Marathon with a long term focus on next year’s Dusi Canoe Marathon, will again be a difficult pair to overcome this weekend despite their lack of experience racing together in the Western Cape.

Berg and Breede River veterans Heinrich Schloms and Gavin White as well as Cape Town duo Ben Biggs and Ben Bradford, who finished third and fifth respectively at the recent provincial championships, will be two more combinations eager to put in another strong showing.

Many will also have a curious eye on the Houston brothers, Andrew (Seed Co.) and Alan while the reuniting of surfski stars Tom Schilperoort (Hold Fast) and Dawid Mocké (Mocké Paddling) will have many struggling to predict a top three ahead of Saturday’s start.

The ladies K2 race will be an interesting affair with Western Province champions Beavitt and Henderson out of the running.

2014 race winners Alex Adie and Nikki Mocké have once again confirmed their partnership for the contest they claimed so handsomely last year while youngsters Kirsten Flanagan and Candice Murray as well as Jordan Peek and Natasha Bulbring will also hope to make a run at the women’s title.