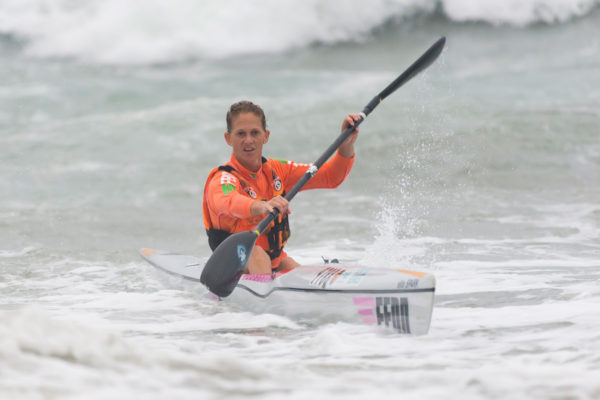 Having had to deal with benign conditions recently, the conditions on Friday suited the experienced Fenn Kayaks’ ace Michelle Burn who notched up her first win of the series at the Thule Surfski Challenge, Race Four of the 2017 FNB Surfski Series on Friday, 27 January. Anthony Grote/ Gameplan Media

Durban – A northerly wind on Friday night brought with it contrasting conditions to the FNB Surfski Series’ previous three races, however it was a welcome change for many as Michelle Burn took advantage of the bigger conditions to open up her account at the Thule Surfski Challenge.

With the series having been dominated by benign conditions in the opening three weeks paddlers were made to start at the backline for safety purposes which meant an even starting point for all as Fenn Kayaks’ Burn licked her lips at the challenging conditions.

“I much prefer bigger surf and being able to get good runs,” Burn mentioned.

“It was a really welcome change for me because I am using the FNB Surfski Series to just get my fitness up and the previous weeks have been tough as I am not as strong as the other girls!

“To get a win is really good as I am still working my way back into paddling and it is satisfying to see that I can keep progressing each week.”

The men’s race was another one horse show as Euro Steel/Epic Kayaks’ Hank McGregor once again showed his class in the varied conditions, to take his third win of the series and assert his dominance over the rest of the men’s field.

“The backline start is always unique but it was great having some different conditions this week as opposed to the previous three.

“I managed to get myself a good lead on the first lap and then I just made sure that I consolidated that lead into the second lap and right to the finish.

“I’m happy with a third win in the series and I always find the FNB Surfski Series is the perfect way to start the weekend,” a satisfied McGregor mentioned.

The men’s podium was finished off by SMG/Epic Kayaks’ Matt Bouman in second and the come-back-kid Grant van der Walt in third ahead of Wade Krieger.

Friday saw another strong performance from the impressive couple of Bay Union/Fenn Kayaks’ Luke Nisbet and Euro Steel/Fenn Kayak’s Jenna Ward as they were not only the first mixed double across the line but also the first double to finish the long course.

The pair of Nisbet and Ward finished just ahead of Tyron Maher and Lee McGregor in second the form pair of Jason Ekstrand and Richard Lowe in third.

The short course once again proved to be a hit with paddlers who did not want to take on the 8km longer version and it was grand master Bruce Jackson who was the strongest paddler just ahead of Zoog and Ty Haynes in second and Sebastian Garreau in third.

The stand-up paddleboarding division saw a new winner on Friday as Shayne Chipps proved to be too strong for the rest of the field whilst Brandon Read and Jon Ivins finished second and third respectively.