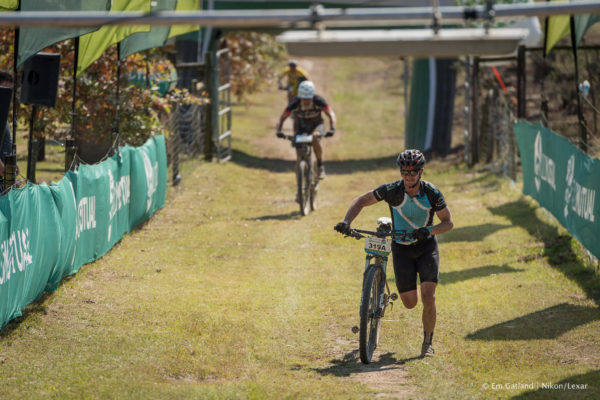 One of joBerg2c’s finest runs himself into Mackenzie Club race village after his bike suffered a mechanical failure.
Em Gatland

Philip Buys and Matthys Beukes (PYGA Euro Steel) continue to dominate the 2017 Old Mutual joBerg2c. On a short, punchy 82km day 7 ride from Glencairn Farm in Himeville to Mackenzie Club near Ixopo, PYGA Euro Steel were able to claim their fourth stage win of the event in a time of of 3:00:39.

The chasing pair of Gawie Combrinck and Nico Bell (NAD Pro MTB) crossed the line battered and bruised in 3:01:47. In the Lanham-Love Mixed Category, it was a familiar story with dormakaba teammates Darren and Candice Lill finishing first, shortly followed by Lanham-Love Valencia riders Grant Usher and Amy Beth McDougall. Their times were 3:15:21 and 3:16:04 respectively.

At the start of the day, riders asked for their eggs Sani side up in the picturesque Glencairn Farm setting on Sani Pass Road, with many sorry to leave the exquisite race village setting. But leave they did, and they were glad for it because day 7 of the joBerg2c is a mountain biker’s delight.

Among those thankful for the shorter and more technical stage was Candice Lill, who enjoyed yet another strong day at the office despite tapping off the pace in preparation for tomorrow’s day 8.

“It was a fun day with a lot of single track which we rode at quite a pace. Everybody thought it was going to be easy being shorter and flatter, which isn’t necessarily the case. So you still have to prepare yourself to go quite hard!” said Lill.

Lanham-Love Valencia’s Grant Usher enjoyed yet another spectacular day on the bike, saying he and partner Amy Beth McDougall pushed hard but also had fun.

“We had so much fun on the single track. Amy rode well and we fought really hard, but Candice and Darren have been doing a good job at putting pressure on us, especially at some of the climbs, just cracking us slowly,” said Usher.

McDougall said she is feeling the strain in her legs, but is excited for the final official day of racing tomorrow.

“Today we just tried to keep up with Darren and Candice. They’re really strong, especially Candice, she is just going so well. It’s really impressive to see how they’re riding, but every day we just gotta keep fighting.”

In the men’s race, NAD Pro MTB rider Gawie Combrinck crashed shortly after the 63km mark. He finished with injuries to his upper-right thigh and forearm.

“Just before the second water point on the big open road, I was behind Phil and my front wheel just got caught in a rut and I came off my bike. It was nice of the PYGA guys because they waited for me to get back on the bike,” said Combrinck.

As for tomorrow being the final day to cut into PYGA Euro Steel’s massive lead, Combrinck said the task won’t be easy. He said, “Ag tomorrow we will just see how it goes and wing it.”

“I thought Gawie was hurt quite badly but he looks like he is all fine now. We waited for them and checked to see if they were okay but they said we should keep on going. It was a good day with some nice racing for a bit. Between the four of us we threw some punches in the racing today, which was fun. I think it was at about the second last climb that I got a small gap and just rode on nicely to the end,” said Beukes.

Philip Buys, renowned for his strong technical skills on the bike, said, “We made the most of the technical sections. There was lot of sweeping smooth corners among the single track. It was great fun, like riding on a roller coaster. We just stuck with NAD Pro MTB, and when they went a little harder we just stuck with them and they couldn’t really shake us. It’s nice to have that buffer going into the final racing day tomorrow.”

With Saturday’s day 9 a neutral cruise to the coast, day 8 is the last day to jockey for position at the joBerg2c. Riders will tackle a 98km route that includes a joy-riding descent into the Umkomaas Valley – but then they’ll also have to climb out of it before reaching the penultimate race village at Jolivet in Highflats. A long, tough day awaits.