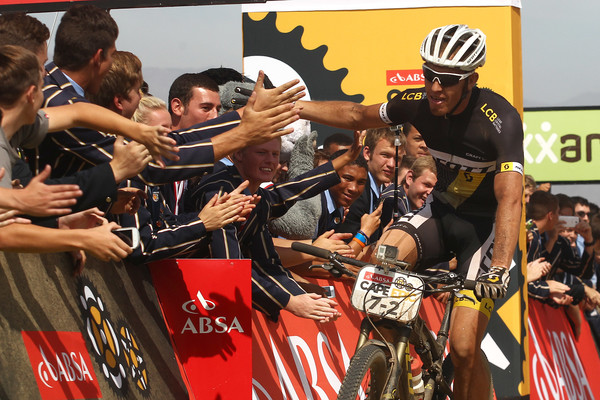 The looped route – starting and finishing in Worcester – included some back-breaking  climbs and rocky surfaces, giving rise to many tyre problems throughout the field. The sun also made conditions difficult for some of the backmarkers.

But the top contenders for the overall win all managed to get through without much drama and the yellow zebra jersey remained on the shoulders of the Investec-Songo-Specialized team of Swiss Christoph Sauser and his Czech teammate Jaroslav Kulhavy.

An elated Buys admitted after crossing the finish line that he and Beukes (Scott Factory Racing) had taken a “long shot” gamble by breaking away inside the first hour.

“We went hard from the start,” he said. “I said to Matthys that I couldn’t hold the pace for another three hours, so we backed off”.

“But then I started feeling better and the gap just kept growing. Towards the end we controlled it … accelerating when we felt good,” said Buys.

At one stage the lead had grown to over six minutes, but the big guns behind them – not too concerned about Buys and Beukes because they are not a threat in the overall general classification – closed it down a bit over the three closing “Skyscraper” climbs.

Topeak Ergon’s Kristian Hynek of the Czech Republic and Austrian Alban Lakata finished together with Sauser and Kulhavy, three-and-a-half minutes behind the South Africans.

Sauser said he had been “worried about this stage … there are very sharp rocks and you have to be careful”. He added that there had also been a lot of thorns on the course: “At one stage I could see more thorns in my tyre than tyre.”

Sauser and Kulhavy generally rode conservatively and to protect the yellow jersey on the day: “Every day wearing the yellow is like winning a break point in tennis and today was another set won,” smiled Sauser.

Lakata said they had been happy with second “but we want to be more happy and win a stage”.

“We tried to put the Specialized guys under pressure … but unfortunately it didn’t work,” said Lakata.

Hynek and Lakata are both good climbers and might fancy their chances of closing the gap on Thursday’s 117km route from Worcester to Wellington, which includes some extended climbs.

Buys and Beukes’s heroics put them ahead of the rest of the other teams from the continent and into the Absa African special jersey. Darren Lill and Waylon Woolcock (RED-E Blend) had been leading the race for the jersey before the stage but lost more than eight minutes on the Scott pair. They are now two minutes behind them in the overall standings.